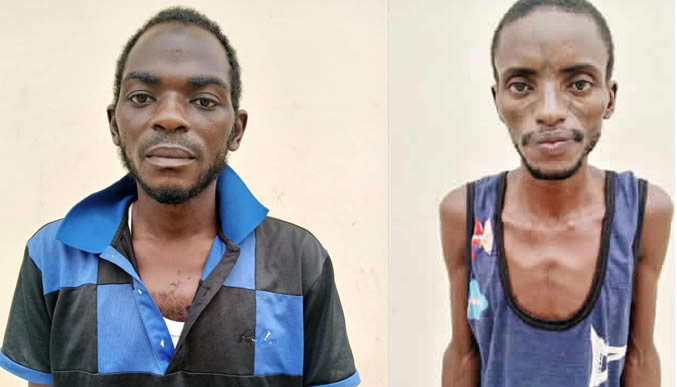 Two suspected bandits, Abdullahi Danshoho and Illiyasu Salleh, have owned up to their roles in the kidnapping of two patients and a nurse at a hospital in Nasarawa State.

The suspects and their gang members at large reportedly invaded Kunwarke Clinic and Maternity in Lafia, Nasarawa State, sometime in November 2020 and abducted two patients and a nurse.

They were alleged to have collected N6m ransom before freeing their victims.

Danshoho and Salleh were arrested recently by operatives of the Inspector-General of Police Intelligence Response Team led by DCP Abba Kyari.

Married with four children, 25-year-old Danshoho stated that he was a truck driver but went into kidnapping because he was not making enough money from the job.

He said, “I finished my NCE (Nigeria Certificate of Education) in 2020 but I have yet to collect my results. I became a truck driver but things were difficult. I met my friend, Illiyasu (Salleh), sometime in September 2020 and he told me the easy way to make money. He told me that kidnapping was the only way out. He told me to look for people with money that we can kidnap.”

He said he had participated in five kidnap operations – the last being in December – including the abduction of his neighbour who refused to give him money.

He explained that he gave the man’s details to Illiyasu who arranged his abduction, adding that he got N100,000 share from a ransom paid.

Danshoho stated, “The second successful operation was arranged by Illiyasu. That clinic is where we normally go for treatment. My job was to confirm that the director of the hospital was around. On the day we struck, I was sure that he was in the hospital. Unfortunately, he managed to escape. That was why they decided to abduct patients.

“After some days, they gave me N100,000 as my share. I did not complain because they told me that the patients were farmers and the nurse was from a poor family. I later learnt that they collected N4m.

“A week later, I brought the third job. It was my friend and we used to hang out. I decided to kidnap him because I was sure that his parents could afford to pay for his release. They paid N1.5m and I got N100,000 as my share. It was when he returned home sick that I regretted my action. I used part of my proceeds to pay outstanding fees at the school so that I can get my certificate.”

Salleh, 24, said he was into cattle rearing and farming but quit because they did not fetch him enough income. He said he decided to go into kidnapping “because it is an easy way to make money.”

“The truth is that we don’t make much money from cattle rearing and one needs to stay with a cow for many months before it will be ready for use. Kidnapping gives quick money,” he stated.

Narrating how the kidnapping at the hospital was carried out, he said Danshoho, who is well known by the nurses, pretended as if he came for treatment of headache.

He said, “I was outside. My gang members, Maigari, Bodejo and others (at large) entered the clinic but did not see the director. It was like he heard the gunshot and escaped before they could reach him. Maigari then decided to abduct two patients and a nurse.

“After a ransom was paid, l got N200,000 and was angry. I threatened to expose them if they did not give me an extra share. I got additional N100,000 but I don’t know the actual amount that was collected.”