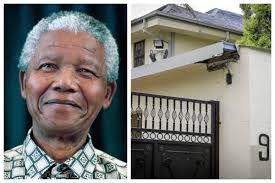 According to Sunday Times, the house at 12th Avenue on Houghton home in Johannesburg became what it is now after Rolihlahla Mandela (NRM) Family Trust stopped paying the utility bills.

The once-elegant house, which hosted some of the world’s leading figures while the former president was alive, was until last year occupied by Mandela’s grandchildren, Ndaba, Mbuso and Andile, who are the sons of the late Makgatho Mandela. Makgatho was Madiba’s son by his first wife, Evelyn.

The house is now in a terrible state as the electric gate is seemingly broken, portions of the roof fascia are missing or collapsing, the tennis court is crumbling and the tiled roof of one of the outbuildings is sagging.

While the once-manicured pavement garden where well-wishers placed stones painted with messages of hope shortly before Madiba’s death in 2013, is now overgrown and littered with rubbish.

Check out the present state of the once-elegant house below: