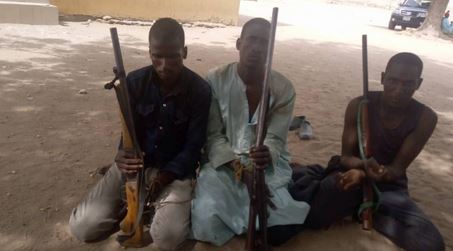 The suspects were apprehended at their various hideouts in Muleng and Chigari Villages of Song following credible information and intense search by the Police and Vigilantes of Song Division.

Three suspects have been apprehended by operatives of Adamawa State Police Command for alleged armed robbery and kidnapping while three single barrel guns have been recovered from them.

Spokesperson of the command, DSP Suleiman Nguroje, who disclosed this in a statement on Sunday, March 21, in Yola, said the suspects were responsible for the kidnap of Engineer Elan Jobbo, a principal of VTC Jabbi Lamba, Alhaji Jauro Mamburso and Alkani Zumbe, all of Girei and Song Local government Area, around May, 2020.

Nguroje said the suspects were apprehended at their various hideouts in Muleng and Chigari Villages of Song and Fufore Local government areas on Saturday, March 20, following credible information and intense search by the Police and Vigilantes of Song Division.

“Investigations so far revealed that the suspects do participate in armed robbery/kidnappings activities across the Boader between Nigeria /Cameroon Republic.

“The Commissioner Police, CP Aliyu Adamu Alhaji, while commending Dpo Song and his men for making it difficult for those criminals to escape arrest, equally directs further investigations into the case to bring up more Human and Material evidences for proper prosecution.”

Nguroje said as part of efforts at tackling criminal activities and other related offences, the CP working in concert to deepen intelligence and strengthen security in the State, deployed Rapid Respond team (RRS) and Anti Kidnapping unit of the Command to go after the kidnappers in their hideouts everywhere within the State.