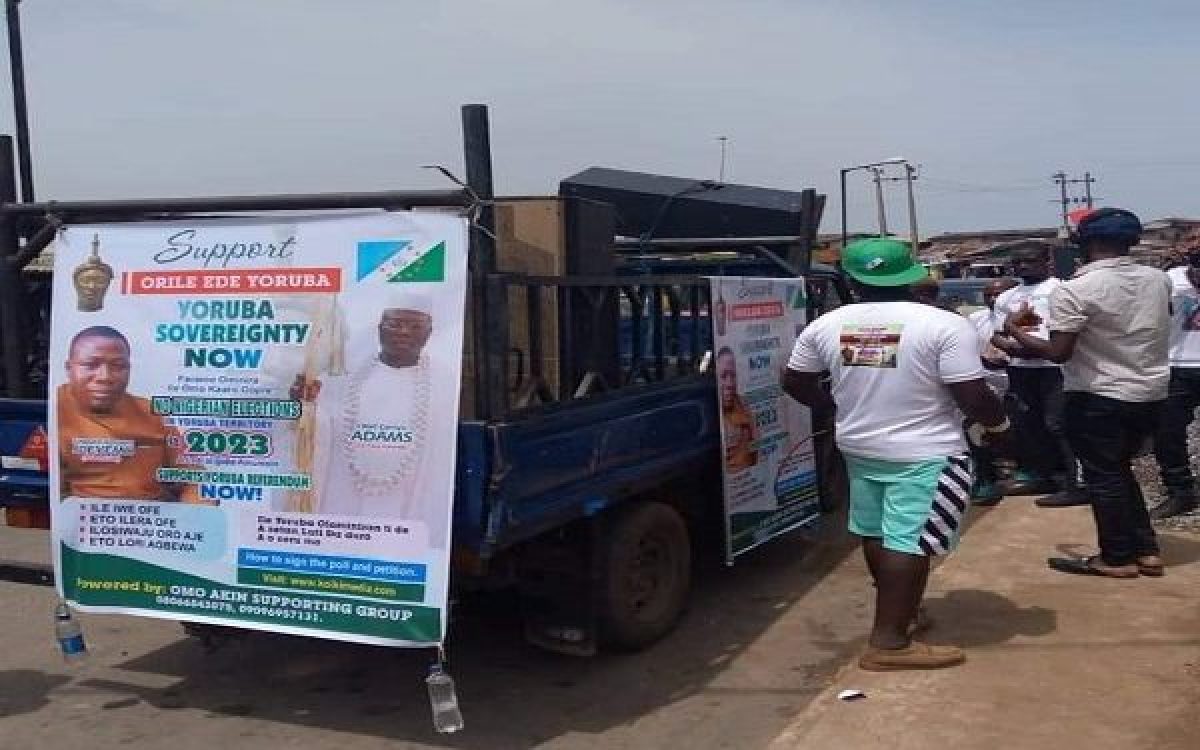 The spokesperson to Yoruba activist, Sunday Igboho, Olayomi Koiki, joined by other supporters of the activist on Sunday, stormed Lagos State where they organized a rally to create more awareness on the need for the creation of Yoruba Nation.

They were in the Agege area of Lagos to canvass support for the establishment of the Yoruba Nation, Naija News understands.

According to Koiki, the realization of an independent Yoruba nation will resolve the injustices suffered by the region as a part of Nigeria, describing the current set-up as a master-slave relationship.

The spokesperson shared a live broadcast of the sensitization rally in which he and other supporters of Igboho were seen addressing residents on why the Yoruba nation must be created.

He argued that the amalgamation of 1914 was designed to end after 100 years and so each region is at liberty to go their seperate ways.

“According to the amalgamation of 1914, after 100 years, we can all go our separate ways, that 100 years has been completed since 2014, why are we still together?

“Check the N100 note, it is stated there that the amalgamation ends in 2014, it has been over 7 years we have been suffering now, no jobs, the government of this country does not favour us, they only favour themselves. Let us leave this country, forget about the N2, 000; N3, 000 or N10,000 they give to you.

“We don’t have the money or rice to distribute to you but we are fighting for a better future for you. Except you are a politician, this country does not favour you. Let us join hands together to support the independence of the Yoruba nation.

READ  ‘What a Next Level of doom’ – Buhari govt under attack as NBC shuts down Dokpesi’s AIT, RayPower

“We have lots of mineral resources that we will utilize and live well. The Nigerian government has no reason whatsoever to say we should not leave but they are enjoying this Master-Slave relationship. Nigeria has refused to let us go simply because of the benefits derived from us, we have gold, oil, cement and every other thing.

“Yorubas are not being favoured, Yoruba nation now. They cannot kill us and kill our grave. The Yorubas are not enjoying this country, Igbos too even the Hausas are crying, only Fulanis are enjoying everything,” he said in the video.

This development comes after an earlier report by Naija News that an aide to Sunday Adeyemo (Sunday Igboho), Olayomi Koiki, has threatened to attack the palace of the Alake of Egbaland, Oba Adedotun Aremu Gbadebo and other Yoruba Obas who refuse to speak up.

It will be recalled that Oba Adedotun had on Friday appealed to secessionists to have a rethink, saying “If Nigeria failed as a country, the entire black race had failed.”