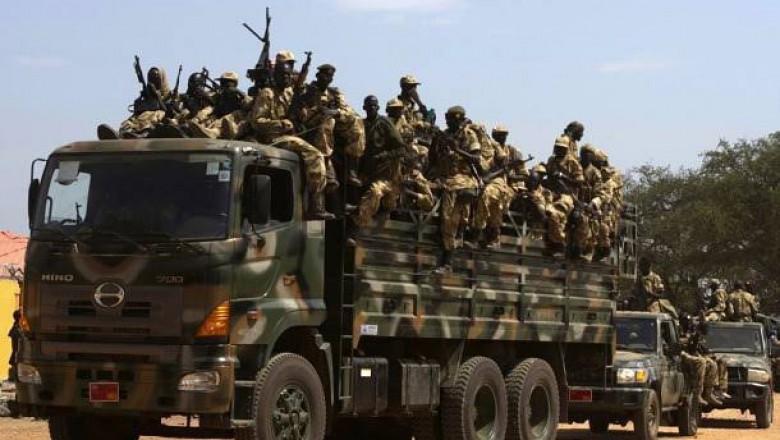 There is a heavy military right now in certain places of Onitsha, Anambra State as troops of the Nigerian military have been deployed to capture Eastern Security Network operatives who have been alleged to be the rampaging gunmen wreaking havoc in the state.

SaharaReporters learnt that the military personnel were sighted on Monday evening on Atani Road, Upper Iweka in Onitsha, and on Onitsha-Owerri Road – with roadblocks for possible stop-and-search.

Only last week, rampaging gunmen attacked some police stations in the state, killing policemen and carting away heavy arms and ammunition from police stations.

The gunmen killed policemen in Neni, Anaocha Local Government Area at a checkpoint, while three weeks ago, they killed about four policemen in Nkpologwu in Aguata.

The military was not spared also as the gunmen killed soldiers at an outpost in Awkuzu, Oyi Local Government Area in Anambra.

“There is a heavy military presence in Onitsha. Some roads have been blocked and areas cordoned off by the troops. It is obvious they are looking for ESN and other militias. The military is enraged over the continuous killings by gunmen in Anambra.

“There is no movement around Enamel Junction, and also on Onitsha-Owerri yesterday evening as the soldiers blocked everywhere. The shooting was much,” a source said.

“I also got information from my driver that Atani and Obodo Ukwu roads were affected,” another resident narrated.

“The ESN militias are alleged to be behind the attacks on army and navy units in Awkuzu and Onitsha. The military even lost some of their weapons during the attacks. The troops deployed are looking for ESN and Indigenous People of Biafra members,” another source stated.

SaharaReporters had on Monday reported that some yet-to-be-identified gunmen shot dead a Nigerian Navy personnel, Faruk Yusuf, who was deployed to Onitsha.

The killing came one week to the wedding ceremony of Faruk, who hailed from the Unguwan Sarki area of the Biu Local Government Area of Borno State.

SaharaReporters stated that the police had launched a manhunt for the killers, as Anambra State had recently become notorious for killing uniformed personnel such as the police and the military, allegedly by ethnic militias.