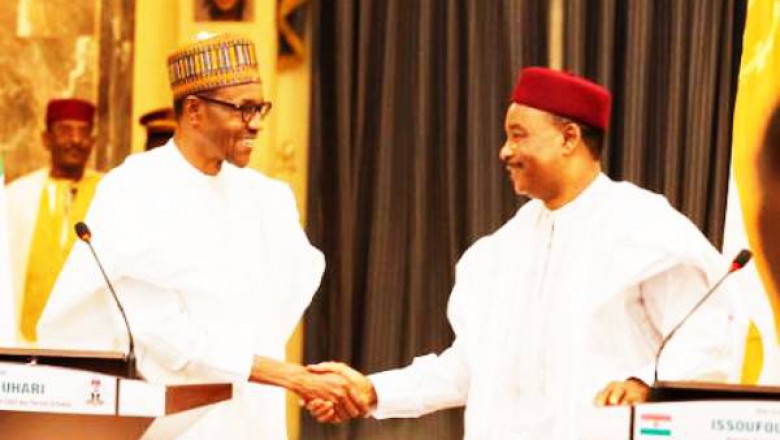 President Buhari has said Nigeria is prepared to help Niger Republic and other adjoining nations in the battle against illegal intimidation.

Senior Special Assistant to the President on Media and Publicity, Garba Shehu, disclosed this in a statement on Tuesday.

Shehu said President Buhari and Mahamadou Issoufou, President of Niger Republic agreed to strengthen sub-regional security as a way to push back against Boko Haram and Islam in West Africa, ISWA’s worrisome assertiveness in sub-Sahara and Sahel regions.

“President Buhari, who called his counterpart on the phone to sympathise with him and citizens of the neighbouring country, following the recent killing of 137 people, strongly condemned the terrorist attacks, describing it as heinous.

“Our deepest and heartfelt condolences to the families of victims and people of Niger Republic. Nigeria stands with all her neighbours in the fight against terrorism,” the statement read.

According to the group, Nigeria is ranked second on the list with 112 attacks.

Gun-wielding fighters from the Islamic State West Africa Province (ISWAP) had claimed different attacks in Nigeria within the 81 days.

The group has killed thousands and displaced millions in Northeastern Nigeria.

The Nigerian military has repeatedly claimed that the insurgency has been largely defeated and it frequently underplays any losses.

In the past months, soldiers have been targeted by the insurgents, who lay in ambush on their path.

Hundreds of soldiers and officers have been reportedly killed since January 2021.

At least 33 soldiers were recently killed when two explosive-laden vehicles rammed into a military convoy in Wulgo.

In February, about 20 soldiers were also killed in Malari, Borno State by the insurgents.

SaharaReporters gathered that the soldiers were on patrol to clear some Boko Haram elements in the area following credible intelligence when they were ambushed by the group.