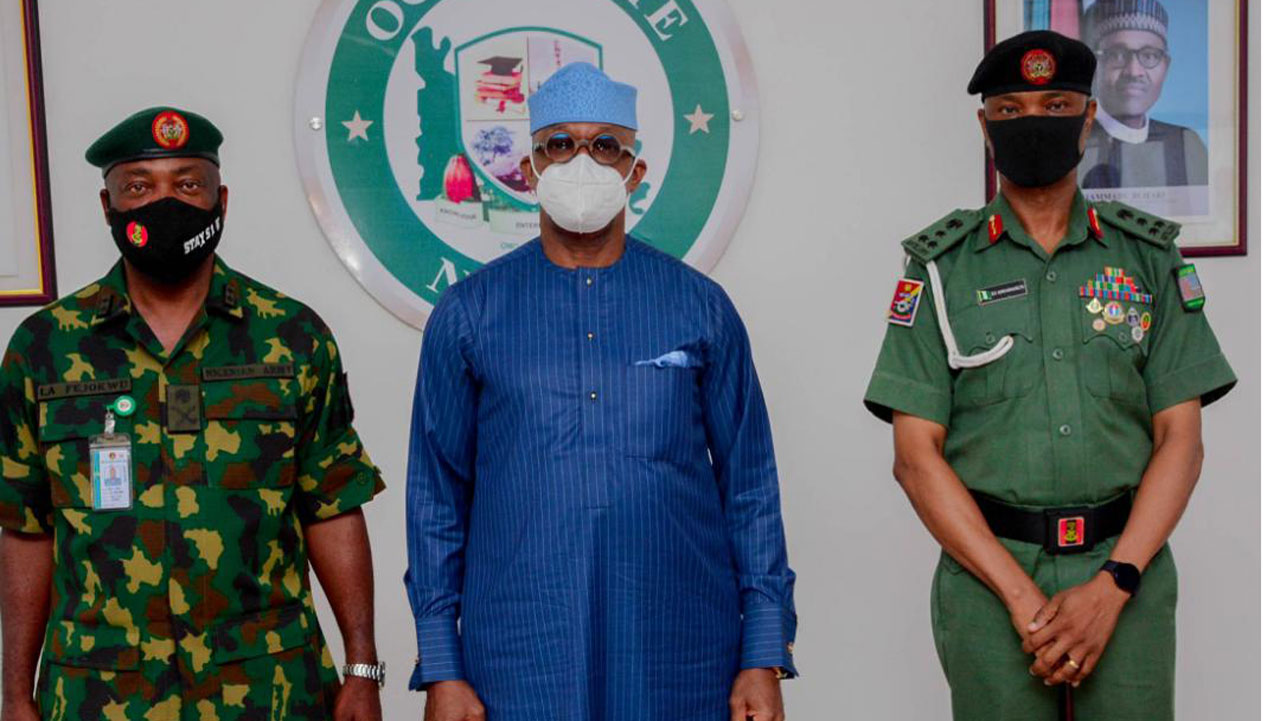 Governor Dapo Abiodun of Ogun State has called on the Joint taskforce on Anti-Smuggling, comprising men of the Nigeria Army and the Nigeria Customs to be civil in the discharge of their duties so as to put an end to the killing of innocent souls.

Abiodun said this at his Oke-Mosan Governor’s office, Abeokuta, while playing host to the General Officer Commanding 81 Division of the Nigeria Army, Major General Lawrence Fejokwu.

The governor recalled that his administration had intervened on several occasions to manage the crises caused by the death of some Ogun residents who were killed by stray bullets from the joint patrol on smuggling.

“Your men are involved with the men of the Nigeria Customs in a joint patrol taskforce that prevents smuggling across our border areas, but, what we’ve seen lately is that in the process of trying to contain smuggling, there have been incidences where shots are fired and innocent civilians lose their lives.

“Lately, we’ve had cases of innocent Ogun State indigenes being killed because men of the Customs and this taskforce are trying to curb smuggling. I know our people are sensitive to this kind of things where school children coming from or going to school get hit by stray bullets, commuters on motorcycles and traders in their shops getting hit by stray bullets time and time again. These had happened and we have had to come in to manage those situations.

“I will like you to help us look into how we can be more civil in dealing with this issue of smugglers and stray bullets killing our citizens,” he said.

The governor, while urging the joint task force on anti-smuggling to be careful while on duty, said that the administration would continue to support men of the Nigerian Army.

The governor, who also appreciated men of the Nigerian Army and other law enforcement agencies for standing tall in the wake of the farmers and herdsmen crisis, said the administration would continue to create an enabling environment needed by the security architecture in the state.

Earlier in his response, Fejokwu, while calling on the governor to use every channel at his disposal to supply the army with information, said that they would work hard to curb crimes.

“We want you to use every channel available to you to continue to enhance our operations,” he said.

I know that you have channels of communication and channels through which information gets to you. I will please request that you use those channels to avail us information so that we nib any threat in the bud before it becomes bigger,” he said.