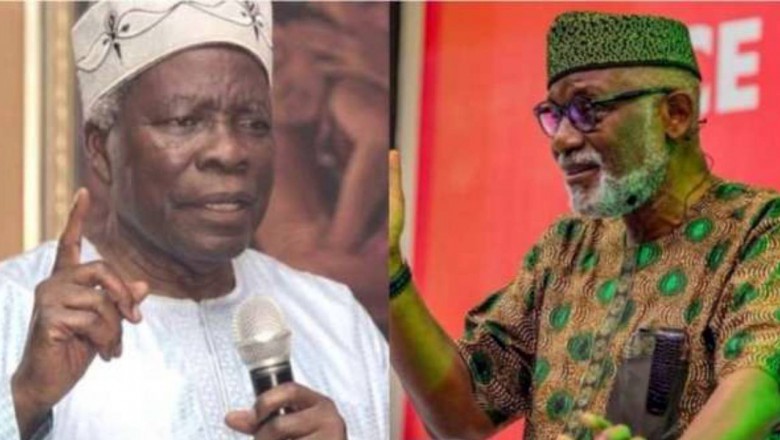 Professor Banji Akintoye’s led Ilana Omo Oodua has berated the Governor of Ondo State, Rotimi Akeredolu, for rejecting the agitation for the creation of a Yoruba nation.

Akeredolu had during the swearing-in of Princess Oladunni Odu as the new Secretary to the State Government and other Special Advisers in Akure, the state capital, on Monday, said, “No part of the entire state, known and delineated as Ondo State, shall permit any Yoruba nation gathering or agitation“.

Reacting to Akeredolu’s position, Akintoye’s Ilana Omo Oodua said Akeredolu spoke for himself, and not the people of Ondo State.

The group made this known in a statement titled, ‘Our Agitation Shall be Bloodless, Intellectually Rooted, Legally Grounded’ on Tuesday.

It stated that the agitation for the Yoruba nation “is not that of a plot for secession as erroneously branded by Akeredolu, but a struggle for self-determination”.

The statement added, “We wish to say very clearly that Akeredolu is entitled to his opinion. He has only spoken for himself. If he is sure he speaks for the classical masses of Ondo State, he should ensure that his army of state-induced terrorists allow us to stage our one million march peacefully in Akure, Ondo State capital to prove whether he spoke for Ondo state people or for himself.

“Akeredolu feeds 100 per cent on the commonwealth of Ondo State people. He is a member of the tiny neo-liberal and neo-classical elites who will never support the wishes and aspirations of the masses.

“We saw how he grandstands on the terrorists and murderous herdsmen illegally occupying the forest reserves in his state and we saw how he chickened out to the chagrine of all of us who staked our reputation to defend him.

“Akeredolu has now surrendered the farmlands in Ondo State to the government of Fulani herdsmen while masquerading to be participating in National Livestock Programme.

“We have made our position known. Our agitation for autonomous Yoruba Nation is legally grounded, intellectually rooted and it shall be executed without shedding of blood.

“Akeredolu cannot sit inside the comfort of his office and claimed to be speaking for the people of Ondo State that he has failed to regularly pay their monthly salary, pension and gratuities.”