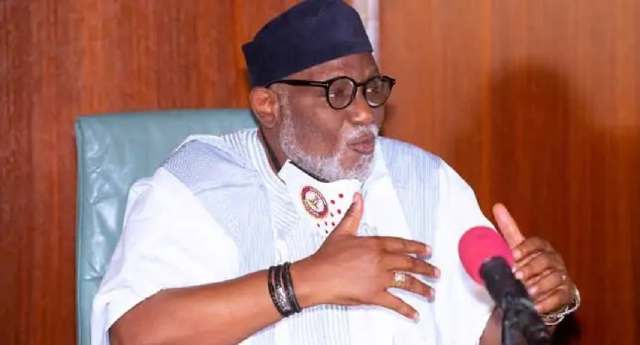 Ondo State Governor Oluwarotimi Akeredolu has said the people’s consensus rather than individual’s agitation will determine the success of any secession bid.

He explained that few people can’t declare the establishment of the “Yoruba nation” without considering the general interest of the South-west.

The governor spoke on Wednesday when he featured on a Channels Television programme monitored by The Nation.

Yoruba rights activist, Sunday Adeyemo (aka Sunday Igboho), had declared that the Southwest would no longer be part of Nigeria with the establishment of “Yoruba Nation”.

Akeredolu said: “It is a group of individuals who are raising this issue; they are entitled to it. Everybody is entitled to his own position. But when you come to the issue of nation or you want to leave a particular setup, there must be a consensus.

“Nobody can, on his own, wake up and say he is speaking on behalf of others. Who gave them such powers?

“We have never yielded power to people to speak on our behalf on matters of this importance. That is what we are saying.

“A few people cannot just stand up one day and say to us: ‘Yes, we want Yoruba nation.’ How? Where did we sit down to discuss this? With who and who? At what point in time? So, if you do not carry everybody along, you cannot be representing us.”

Also, a former presidential candidate in the 2019 general election, Mr. Gbenga Olawepo-Hashim, recommended devolution of more powers to the states and local government areas to forestall further separatist agitations across the country.

The businessman urged the Federal Character Commission (FCC) to address the imbalance among the various ethnic nationalities in the country.

“I quite agree that there is frustration in the land as a result of the problems which over-centralisation of powers in the hands of the Federal Government has caused since the unfortunate military coup of 1966.

“The solution is not the dismemberment of the Republic but de-centralisation of power to the component states, which must start now.

“Nigeria will do better, and we are in fact better together, if we immediately take steps to devolve powers to the states and local governments in areas where there is a clear national consensus,” he said.

Olawepo-Hashim identified areas where Nigerians have started building consensus, including the creation of state police, as follows:

Creation of state and local government police side by side with the Federal Police to make policing more efficient and to bolster national security.
Amendment of the Constitution to enable states have some control over the development of all mineral resources in the inland basins.

Amendment to ensure concurrent jurisdiction of Federal and state governments over electricity generation, transmission and distribution and electoral reform clause to include electronic transmission of results from all level of results collations.

The businessman said a simple Executive-sponsored constitutional amendment Bill narrowed to these clearly defined items may get a resounding support if properly managed with the 36 governors and the Houses of Assembly.

He said it was in the best interest of Nigerians to remain united instead of breaking up.

The governor noted that the agitation by some individuals to opt out of Nigeria would not solve the nation’s common challenges.

Yahaya spoke at opening of All Progressives Congress (APC) Northeast stakeholders’ meeting for the review of the party’s constitution.

“As a result of that, knowing we have a common problem, we have to approach it with common sense of purpose in order to achieve, recover and go out of the problem. There is need for states in the Northeast to have a common position with regards to this issue,” he said.