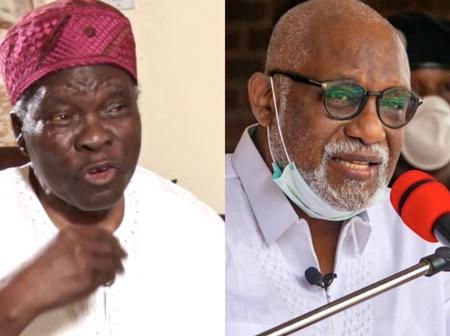 Akeredolu had said self-acclaimed Yoruba activist, Sunday Igboho and other groups agitating for Yoruba nation were not welcome in Ondo.

But Akintoye attacked Akeredolu over his comment and for rejecting Yoruba nation.

“We wish to say very clearly that Akeredolu is entitled to his opinion. He has only spoken for himself. If he is sure he speaks for the classical masses of Ondo State, he should ensure that his army of state-induced terrorists allow us to stage our one million march peacefully in Akure, Ondo State capital to prove whether he spoke for Ondo state people or for himself.

“Akeredolu feeds 100 per cent on the commonwealth of Ondo State people. He is a member of the tiny neo-liberal and neo-classical elites who will never support the wishes and aspirations of the masses,” Akintoye said.

But Akeredolu, in a statement on Thursday by his Special Assistant on Special Duties and Strategy, Doyin Odebowale, said reinstated that there would be no agitation for secession in any part of Ondo State.

He said Akintoye should submit himself to the people if he is so desirous of representing them.

According to him, it is presumptuous, denigrating and condescendingly spiteful for a group of hustlers, living largely in anonymity but struggling for relevance, to keep proclaiming and legislating on issues which affect the destiny of a whole people, without the faintest suggestion of paying even scant regard to their feelings or extending due courtesy to the real representatives of the people whose opinions they discounted as unimportant.

Akeredolu said the people were discerning and that the knew the impostors, as they had not forgotten the activities of the suborned agitators, the presumed penitent activists.

He added that the Ondo people, and indeed Yoruba were the easiest to lead but the most difficult to deceive, saying that with them, sophistry and demagoguery had their limits.