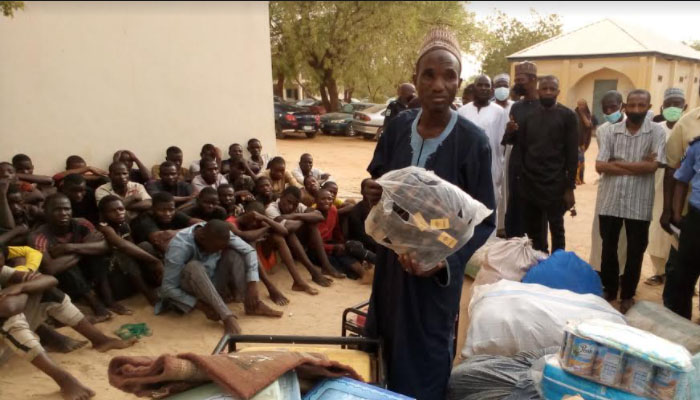 Thirty-four suspected looters of goods belonging to victims of the Katsina Central Market fire, including a 43-year-old Islamic cleric, have been arrested by police in the state.

The 43-year-old cleric, Muhammadu Abba was reported to the police by one of his wives for hiding some looted goods made up of female shoes under their bed.

Other looted items displayed are provisions, generating sets, cooking utensils, fabrics, children’s wears, and sanitary products, wall clocks, and others worth hundreds of thousands of naira.

The other suspects were arrested as they were trying to steal the goods of the victims of the inferno at the Katsina central market.

Parading the suspects before reporters at the Headquarters of the Police Command, spokesperson of the command, SP Gambo Isah, urged members of the public to give useful information about goods looted which are believed to be hidden in different homes.

While expressing displeasure over the act when traders were counting their losses during the inferno, SP Isah pleaded with the public to assist victims in times of disaster rather than loot their properties.

The arrested cleric who has two wives with 12 children and about 350 almajirai under his care confessed that it was the handiwork of the devil that led him to criminality.