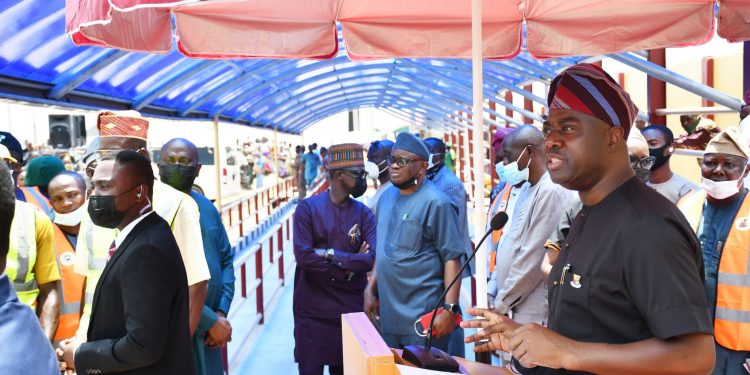 The governor, who addressed Keke and motorcycle riders at Agodi Gate area, venue of the event, said the loading points would facilitate easy transportation of residents in the state capital.

While addressing Okada and Keke riders, who gathered at the Agodi Gate Junction, the governor said his administration will not ban the activities of Okada riders, but would re-organise and coordinate them to conform with modern ways of doing transport business.

He maintained that when properly organised, it would be easy to differentiate individuals doing other businesses from commercial motorcycles and tricycles riders.

He also enjoined Keke and Okada riders to do away with those using Okada and tricycles to commit different crimes.

A statement by the Special Assistant (Print Media) to the Governor, Moses Alao, indicated that the governor explained that the loading points were designed as a pilot scheme, adding that if the units are used judiciously, the initiative will be replicated throughout the state.

Makinde said: “You motorcyclists and tricyclists are part of those who made this government come into place and the government has decided to come up with this pilot project.

“We want a situation whereby those who want to use Okada or tricycles won’t have to stay under the sun or be disturbed by the rain as the rainy season is fast approaching.

“We also want you to be coordinated and organised.

“I already told the people in charge to install solar lights here so that you can all do your businesses comfortably at night.

“We don’t want to ban Okada and tricycles in the state but there must be regulation.

“So, what we want you to do is for you to get yourselves organised.

“We have security challenges and I must say that Okada and tricycle operators have to help the government.

“When you are organised, you can fish out those who are using Okada and tricycles to commit different crimes and hand them over to the law enforcement agencies.

“The good news now is, if you use this place very well as expected, we will replicate it all over the places where there are garages like this in the state.

“At the back of this place, there will be toilets to avoid people messing this place up.

“So, organise ourselves, because they use Okada and tricycles in other countries too.

“There is no reason why we cannot manage it successfully here.”

Earlier, the Special Adviser to the Governor on Security, Fatai Owoseni (retd), said the governor has adopted a slogan for the state, which is P2P, from poverty to prosperity, and that in line with that, he has identified that there are potentials that are limited and that “that is one of the major factors causing the unrest we are having all over the country.

“In view of this, the governor also believes that the transport operation in the state needs to be modernised to an extent.

“That is why we have resolved that the operation of Okada and Keke NAPEP will not be banned in this state but will be modernised.

“So, he has brought the global best practice to Oyo State, which has translated to the construction of two units of an ultra-modern Okada and Keke NAPEP loading point as a pilot scheme.

“What we are seeing here today can contain a total of 90 motorcycles and about 20 tricycles at a go.

“This will not only help the operation of the Okada riders but also the people who patronise them, who will not have to stand under the sun to board either a motorcycle or a tricycle.