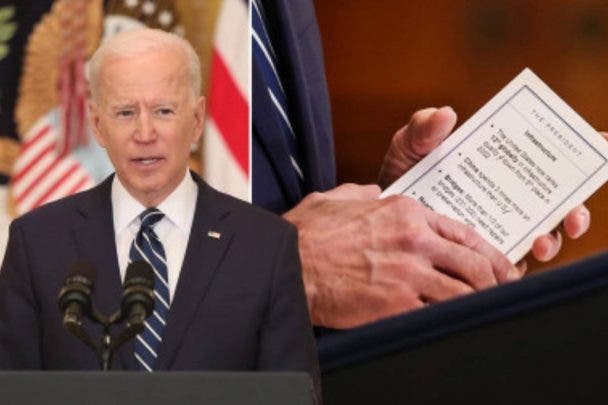 The President of the United States, Joe Biden, was photographed holding a paper sheet of points and cue cards he used to get through his White House briefing on Thursday.

This is coming amidst reports that the president suffers from early stage dementia continue to grow.

78-year-old Joe Biden, – the oldest ever US president, accidentally revealed an A4 sheet of paper complete with the names and photographs of journalists called on to ask him a question.

During the press conference Biden also appeared to lose his train of thought while discussing the migrant crisis at the US southern border, and said he was unsure of whether to give too much detail.

The move has been slammed by several people on social media. American writer Candace Owens criticised Biden for referring to a cheat sheet at the press conference. The New York Times bestselling author wrote,

“Joe Biden had a cheat sheet with the names and faces marked of which journalists to call on, and he knew EXACTLY what questions would be asked of him.” She further said that it was not a press conference but a play put on by bad-faith actors in a “pseudo-democracy.”