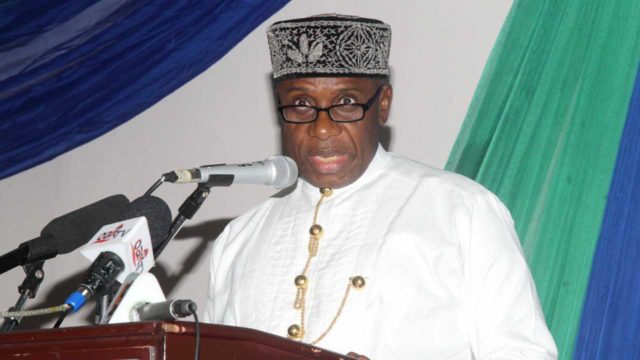 The Minister of Transportation, Rotimi Amaechi, on Monday, noted that the decision of the House of Representatives to go public on the Sovereignty Immunity Clause in the Chinese loan has delayed the approval for the $5.3bn Ibadan-Kano standard gauge project.

Recall that the lawmaker challenged the sovereignty clause in the loan agreement with the China Exim Bank which funded the Abuja-Kaduna and Lagos-Ibadan standard gauge trains.

The clause in the loan gives China access to some national assets if the Federal Government fails to fulfil its side of the deal.

The former Governor of Rivers State, while speaking on Channels TV said the selfishness of some lawmakers delayed the approval of the loan by China as they began to ask more questions.

He said, “That is where we are. The loan for Ibadan-Kano, up till now we have not gotten approval and as at the time that issue happened, we were on the verge of getting approval but they withdrew. So they were asking more questions.”

“The other countries we have loan agreements with, don’t usually ask for sovereignty clause because they trust you. They expect that you are to payback. But the moment you brought it to the public, they are saying, ‘Oh you gave China an immunity clause, so you must also give us.”

“The selfishness of those members, I don’t know what they are pursuing has put the country into jeopardy. Now the other countries are asking for the immunity clause in their own agreement. The other aspect that I said was that the Chinese may likely withdraw, that is where we are. We are talking to them. Be rest assured that we would payback. The fact that these members were investigating should not stop you from… they are doing their legitimate duty, it doesn’t stop you from lending us the money.”

“They are asking questions that we need to explain. We have explained. They promised to give us the loan but at least it held us back from June till now. Imagine if they had given us that money in June, we would have gone far. We have started clearing by now but imagine seven months wasted because a few members of the House of Representatives went to the public because whatever you do here is reported all over the world. That is where we are.”

Amaechi in his statement said the immunity clause in the deal permits China to go to court or arbitration if Nigeria breaches the loan agreement.

According to him, the clause also gives exemption to some national assets if the court awards compensation to China in case Nigeria is taken to the court of arbitration.

“I have explained over and over. What the immunity clause does is to say to you in case you are not able to pay back, I want to be given the opportunity to be taken to court or to arbitration as it is in the clause. So when I go to arbitration, don’t come and wave immunity that I am a sovereign nation, you can’t take me to court.”

“So what the immunity clause does is that it gives you access to the court. But in case you are not able to pay back whether there is an immunity clause or not, there are things that the court would tell you.”

“These are things to go for. What the immunity clause even does for us as Nigeria is that you can go for everything in case of the court awards you but you can’t go for our diplomatic assets outside the country because that is the easiest for them. They will just go to one country and seize our assets.”

The Minister disclosed that the Federal Government has so far borrowed about $2.5billion from China for covering the $500m Abuja-Kaduna line and the Lagos-Ibadan line which is almost completed.

“If you look at the whole total cost, it will be $2.5 to $2.6 billion that we have borrowed from China Exim Bank for the Abuja-Kaduna and Lagos-Ibadan.

“They also lent us about $1.4 billion for the Lagos-Ibadan while the Federal Government had to cough out about $200 million to make it $1.6 billion. We are bringing out about $700 million because we have to end at the seaport in Apapa which was not part of the original design. So we had to take about 45kilometres rail from Ebute-Metta into Apapa seaport,” he explained.