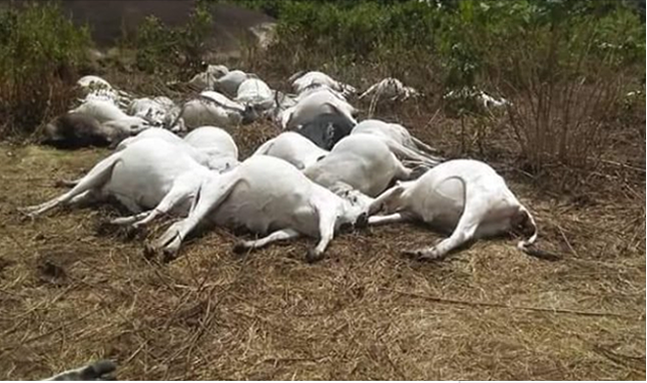 It had been reported that about 50 cows died in mysterious circumstances in the community on Monday.

According to a report by SaharaReporters, the Ondo State Police Command says it is investigating the cause of the recent death of some cows in Akungba-Akoko, Akoko South West Local Government Area of the state.

SaharaReporters had reported how about 50 cows died in mysterious circumstances in the community on Monday.

The cows belonging to one Ibrahim Saliu were rumoured to have been poisoned.

The spokesperson for the state police command, DSP Tee-Leo Ikoro confirmed the incident.

Ikoro noted that the cows were given poisoned water, adding that further investigations into the matter had commenced.

In 2019, about 36 cows were reportedly killed by a thunderstorm at Ijare, in the Ifedore Local Government Area of Ondo state.

Community leaders suggested that the disaster was due to the desecration of a sacred shrine by Fulani herders who had intruded into the shrine of the ancient deity.

Despite the supernatural interpretation by the traditionalists, police said the thunderstorm that killed the cows was natural.

It was gathered that the cows were struck dead at the rocky elevation said to be sacred to the community.