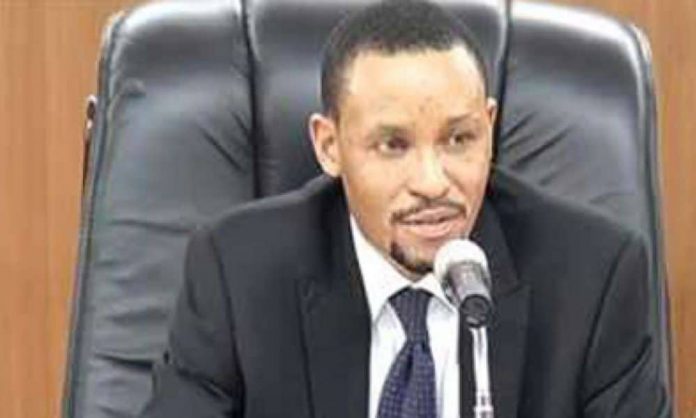 The chairman of the Code of Conduct Tribunal (CCT), Umar Danladi has been called out by Nigerians on social media for using the phrase ‘Biafran Boys’ in an official statement.

The CCT boss was accused of stoking ethnic tensions with the ethnic profiling contained in the official reaction to the incident involving Danladi and a security guard at a shopping complex in Abuja.

It will be recalled as previously published by Naija News that the Chairman of the Code of Conduct Tribunal, was spotted in a viral video assaulting a security guard at Banex Plaza in Wuse, Abuja.

Umar in the video was seen addressing the unidentified security man angrily scolding and shouting at him.

The CCT chairman at a point kicked him before he was restrained by the crowd, including police officers present at the scene.

He was then forced into his vehicle by the police officers. The action however didn’t go well with people who felt the security guard was cheated by the top government official.

But in an official reaction to the incident, the CCT released a statement on Tuesday, 30th March where it narrated its side of what transpired between its chairman and others at the plaza in Abuja.

But the statement, released by the Head, Press, and Public Relations of the CCT, Ibraheem Al-Hassan contained some words believed to be a form of ethnic profiling and therefore sparking some angry reactions from Nigerians.

Particularly, the use of the phrase ‘Biafran Boys’ in an official federal government of Nigeria statement has attracted the wrath of many who are now calling for disciplinary actions against the CCT boss.

The choice of words by the CCT boss was totally condemned.

Here are some reactions:

The use of Biafran Boys (twice) in the statement by the Code of Conduct Tribunal (CCT) is vile and provocative. It’s basic dog whistling against Igbo people. Danladi Umar, chairman of the CCT should take responsibility for his actions and not deflect with this vile press release.

'Biafran Boys'…….. That's how the people in this @OfficialAPCNg govt see people from the South East.

Yet they say the word war is over.. it's really unfortunate and shameful.

If a non-Igbo Federal Government staff can freely, officially and openly call Igbos Biafran boys, why then are they shooting and arresting Igbo youths for calling themselves Biafrans? pic.twitter.com/zbR1Fbf30y

If he meant Biafran boys as an insult, I see it as recognition. A recognition of the fact that we are our own people, in our own right with a separate identity. I see it as a recognition of us as a people who's sovereign statehood is long overdue. I chose to make lemonade of it.

"Biafran boys" and "low personalities". Keywords that need to be addressed now.