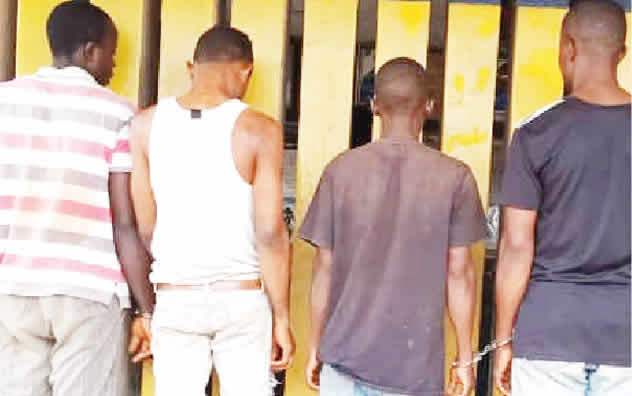 Four suspected kidnappers terrorising Abraka and Umutu areas of Delta state have been arrested by the police.

The acting Police Public Relations Officer in the state, DSP Bright Adefe, stated this on Tuesday in Asaba.

Adafe said the police arrested the suspects following protest staged by farmers in the area over herders’ killings and destruction of their farmlands and crops.

Adafe said, “On March 27, 2021, sequel to the protest staged by farmers in Abraka and Umutu over herders’ killings and destruction of their farmlands and crops, the DPOs of Abraka and Umutu led patrol teams/DSS operatives and vigilante men from the Ethiope East and Ukwuani local government areas on a joint operation to the government reserved land in Obiaruku, where suspected killer herders are believed to be hiding with a view to arresting these suspected killer herders and bring the incessant kidnap and killings to an end in the area.

“The suspects, on sighting the police, engaged the police in a gun duel, but they were repelled by the team; during the gun duel, some of the hoodlums escaped with gunshot injuries.

He added that efforts were on to arrest the fleeing members of the gang.

A team of policemen, on Monday, also raided a hideout behind the Ibori Golf Course in Asaba and arrested suspects, who allegedly deal in illicit drugs.

According to the PPRO, the suspects are Sunday Nwankwo, 22; and Endurance Okwute, 19.