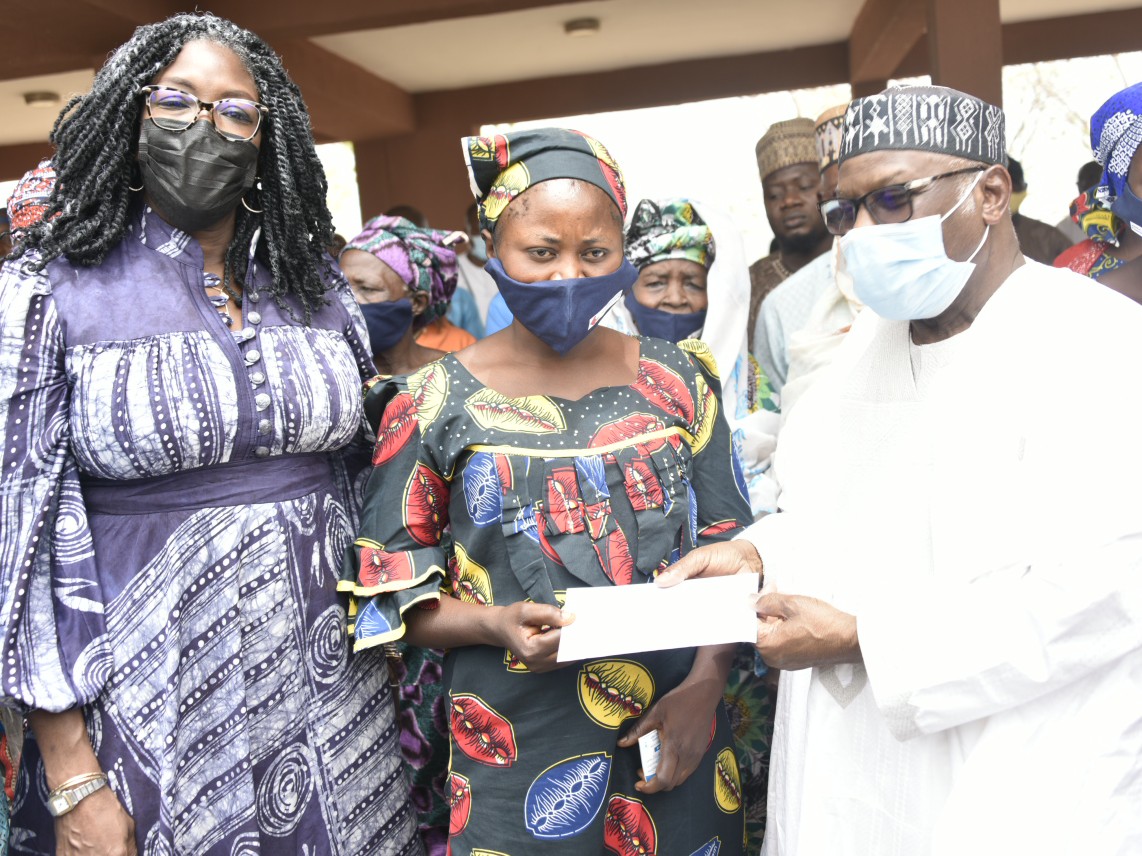 Aliko Dangote Foundation (ADF), on Wednesday, empowered a total of 16,000 women in all the 16 local governments’ area of Kwara State. Each of the 16 thousand rural women were given the sum of N10,000 each, to help boost their petty trade and also start new businesses.

In all, a total of N160,000 million were given to the rural women in a funfair event, held in Moro Local Government area of Kwara State.

Deputy Governor of the state, who stood in for the Governor, Abdulraham Abdulrasaq, lauded the ADF empowerment programme and described it as part of the key economic tools needed to boost the socio-economic activities of the rural areas, and ultimately the state.

He said “This Aliko Dangote Foundation empowerment programme will impact positively on the socio-economic activity of our state. We are so pleased with this and cannot thank Aliko Dangote enough. We don’t want people to come and unnecessarily populate the urban areas, we want to encourage people to stay in the rural areas and add value to the respective lives and also to the state economy. This indeed is a noble gesture”

Dangote’s Group Executive Director, Government and Strategic Relations, Engr. Ahmed Mansur, who represented Aliko Dangote said “…To Aliko Dangote, whom much is given, much is expected. Dangote is being blessed by Allah and he enjoys sharing some of his blessings with the people around him. This investment in the rural areas will circulate well in this rural areas and also boost the economy of the state eventually… We are going to do this on all the local governments in Nigeria.”

In the same vein, the Managing Director and Chief executive of ADF, Zouera Youssoufou, explained that the empowerment programme is an ongoing activity of the Foundation and that while some Local Governments have been covered already, all rural women in the local governments, across the the country will benefit from this noble gesture from Aliko Dangote.

She said, “The focus is on women because we all need to note that once you support a woman, you are supporting the whole family and the multiplier effect of that will be very great. We have done several states in the past and today we are also doing for Kwara, empowering 1,000 women for each of the 16 local governments in Kwara. Each of the women gets 10,000 each, to be disbursed immediately and concluded within the next three weeks all across the state.”

It would be recalled that the same ADF recently launched a major philanthropic programme in Zamfara State, doling out food items running into several millions of naira to support victims of insurgency.

The farmers-herders clash and sporadic attacks by cattle rustlers have displaced thousands, many of whom are currently seeking refuge at Maradun Local Government Area of the State.

Group Executive Director Government Relations and Strategic Relations Mansur Ahmed who presented the food items on behalf of the Group President Aliko Dangote said the Foundation was supporting the government and traditional leaders in meeting the needs of the IDPs.

Only recently Mr. Dangote was rated the world’s 6th largest donors, and Africa’s richest person for almost a decade. His Aliko Dangote Foundation has been endowed with a staggering $1.25billion. He was also listed by Forbes Magazine among the 75 people that make the world turn.

Dangote Foundation had also injected over N7billion to create succor in North East in the wake of the Boko Haram insurgency.

Mr. Ahmed, an Engineer, said Mr. Dangote was very disturbed about the plight of the displaced persons and quickly directed that everything possible is done to provide succor.

Mr. Ahmed said the company was building a 200000-ton capacity of rice mill in Maradun and that when completed this year it would create hundreds of job opportunities for the people of Zamfara State.

Responding, the Emir of Maradun Muhammad Garba Tambari said he was highly elated as the company is the first to intervene by providing food support for displaced persons.

He commended Mr Dangote for the gesture and promise to help secure his investment in his Emirate.

Chairman of the Maradun Local Government Alhaji Yahayah Shehu Maradun thanked the Dangote Foundation for the gesture and pray God to continue to bless the Dangote business.

It would also be recalled that the Federal government, also recently revealed that the N1.2billion hostel donated by the Aliko Dangote Foundation to Ahmadu Bello University Zaria is the single largest donation by an individual in the history of Universities in Nigeria.

Executive Secretary of the National University Commission (NUC) Professor Abubakar Adamu Rasheed who represented President Muhammadu Buhari at the commissioning of the Aliko Dangote Hall extended the Federal Government’s appreciation to the President of the Dangote Group.

The President said: “You have done what no other Nigerian has done since 1948 when the first university was founded. This is the single largest intervention by any individual in any university in this country in the 70 years history of our university. So I congratulate Alhaji Aliko Dangote.”

A visibly elated Governor of Kaduna State Nasir Ahmad el-Rufai who is also an alumnus of the university hailed Alhaji Aliko Dangote for the giant project.

He described Dangote’s generosity as unprecedented, especially his support for education.

The Vice Chancellor said, “We are happy that Alhaji Aliko Dangote has fulfilled the pledge he made in 2016 to build 10 blocks of hostels for Ahmadu Bello University’s student to improve their living condition.

“We may accommodate six students per room. This will certainly go a long way in ameliorating the accommodation scarcity bedeviling the university.

“We thank Alhaji Aliko Dangote for his intervention, we thank member of the Aliko Dangote Foundation and the entire Dangote Family. This is unprecedented for us we can’t ask for anything more except if he thinks of anything he wants to add on his own volition.”