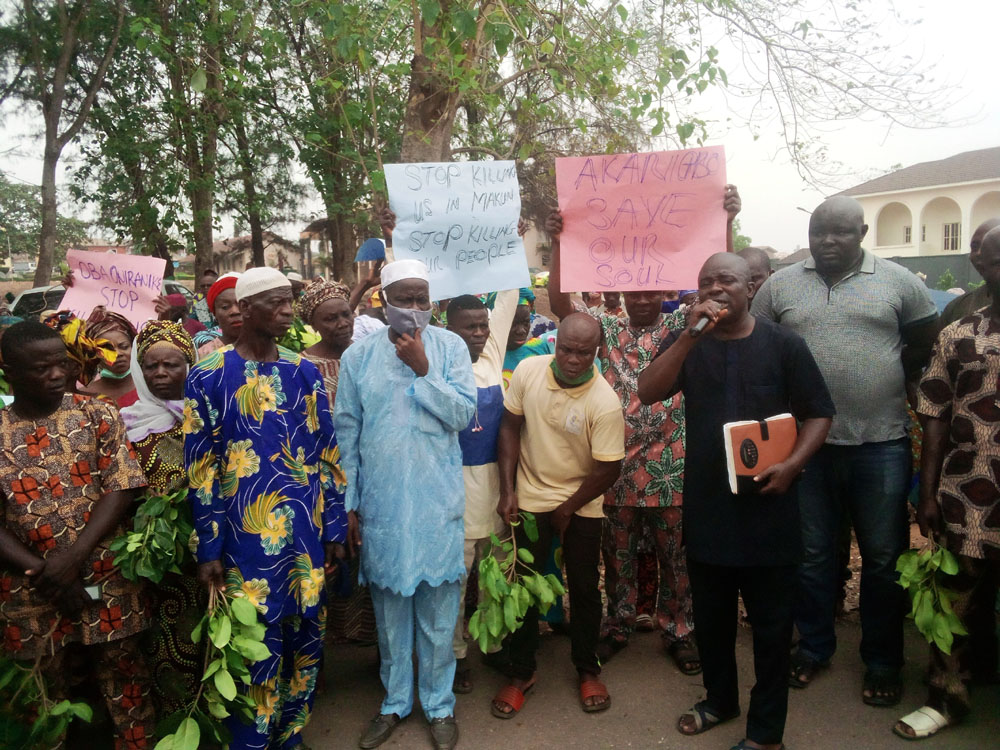 For the second time in a month, the people of Makun, Sagamu took to the street again on Wednesday to protest the menace of armed landgrabbers terrorising about 14 of its communities alleging that the Oniraniken of Iraniken, Sagamu Oba Adewale Adeniji is the brain behind the illegal occupation of its expanse farm land measuring over 4000 acres.

The people of the community who took off from the palace of Ewusi of Makun, Sagamu Oba Timothy Akinsanya marched down to the palace of Akarigbo of Remo land, Oba Babatunde Adewale Ajayi to register their displeasure against Oniraniken of Iraniken, Oba Adewale Adeniji who they alleged brought in several landgrabbers from Ikorodu and other parts of Lagos State to secure this expanse farm land and also chase the people away from their farms.

The protesters were seen with various placards bearing different messages such as “Oniraniken let go of our land,” “Gov Abiodun, Akarigbo call Oniraniken to order”, “We don’t want landgrabbers on our land anymore” among others.

Speaking during the protest at Akarigbo palace, Sagamu, the leader of the protest, Alhaji Jamiu Alabi Olododo disclosed that the Makun indigenes decided to hold the protest yesterday being the day when the Remo Traditional Council holds its statutory meeting so that they could report the alleged unbecoming act of Oniraniken to Akarigbo and of course, the entire traditional rulers in Remo land.

Alhaji Jamiu Olododo explained that “this is the second time in a month that we shall be coming here, the Akarigbo palace, to report the Oniraniken of Iraniken, Sagamu, Oba Adewale Adeniji who is saying that by virtue of one court judgement, he owns the expanse of farm lands of about 14 communities of Makun.

“He has brought in several landgrabbers from Ikorodu and other parts of Lagos disturbing our people on their properties. Our people are now being attacked and chased away from their farm lands. We have been to the state assembly and Oniraniken was told to bring the survey to show the extent of the farm land for which the judgement covered but he refused.

“We are here to report the illegal acts of the traditional ruler to our father, the Akarigbo, Oba Babatunde Adewale Ajayi as well as the entire traditional rulers in Remo land who are having their statutory meeting today. We are saying enough of this act of brigandage and illegal occupation of our common heritage that is not fitting of a king and we are saying that if in the next one week, this illegal act of Oniraniken continues, we might be forced to defend ourselves.”

Speaking in the same vein, Baale of Kanuyi community, Chief AbdulWahab Sodiya who had earlier sent petition against Oniraniken to the Ogun State House of Assembly said that the basis of the petition was to alert the state government on the need to stop the traditional ruler from illegal occupation of farmland that was never his heritage or inheritance.

He said that if at all the royal father has any land around these communities it couldn’t have been more than two plots saying that Gov Dapo Abiodun must as a matter of urgency step into this matter to avert needless communal strife.

Hon. Babatunde Mabawonku also described Oniraniken as an impostor who is just interested in causing unnecessary crisis in these communities that really do not belong to him

Hon. Mabawonku said, “I am above 70 years and one of the elders from Apena Seriki and Igbo Iwaju communities. I and some other representatives have met this Kabiyesi and told him to his face that he is not one of us and so he can’t be laying claim to what is never his but he has refused to change.

“He has continued to bring in thugs attacking our people. We are however tired of this and truly our patience is running out. The government just have to call the traditional ruler to order before things go out of hand.”

Speaking during the protest, Ewusi of Makun, Oba Timothy Akinsanya urged the Akarigbo of Remo land, Oba Babatunde Adewale Ajayi as well as the entire traditional rulers in Remo land to prevail on Oniraniken to tow path of peace and order his thugs out of the expanse farm land in question.

Oba Timothy Akinsanya said that “for almost 10 months I have been appealing to my people to be calm that the whole matter would be resolved amicably but it is like nothing like that is happening and if in the next one week nothing positive happened, I may also be forced to tell my people to go back to their farms and defend their inheritance. I however pray that Akarigbo will intervene and call Oniraniken to order, enough is enough.”

The Akarigbo and Paramount ruler of Remo land, Oba Babatunde Adewale Ajayi while addressing the protesters has however urged them not to take laws into their hands promising to ensure that the matter was resolved amicably.

Oba Babatunde Ajayi said the matter was already before the Remo Traditional Council and would be given speedy attention begging the people of Makun community to exercise patience as in a matter of days the imbroglio would be resolved.

The paramount ruler said “we all know that no sacrifice is too great to have peace and be rest assured that your patience is not being taken for granted, so, definitely, we will look at the issues involved and get it resolved. I therefore want to beg you not to take laws into your hands, let’s continue to give peace a chance because there is nothing really anyone could do in a chaotic situation.”

However, speaking with our Correspondent, the Oniraniken of Iraniken, Sagamu Oba Adewale Adeniji denied using landgrabbers to terrorise the residents of these villages or grabbing their lands saying that the land under dispute is his family land which an high court sitting in Sagamu delivered judgement on in April 2018.

Oba Adewale Adeniji said that though some family members had also approached court to set aside this judgement, an high court had also in January 2020 ruled that the earlier judgement on this said land stays.

The traditional ruler disclosed that he remained a man of peace and would never do anything contrary to the provision of the law.