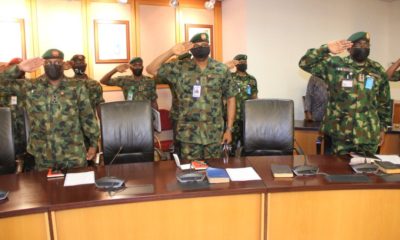 The Nigerian Army has dismissed reports that the North dominated the list of candidates for selection into the Short Service Commission.

It insisted that the selection of successful candidates was done in compliance with the Federal character.

The Director Army Public Relations, Brigadier General Mohammed Yerima, in a statement, confirmed that each state got eight slots, stating that the allegation is divisive.

According to the statement, “the attention of the Directorate of Army Public Relations has been drawn to an ill-informed publication of the referenced story on 29 March 2021 by an online newspaper.

“The publication alleged that the list of successful candidates for Short Service Commission 47 Selection Board which was published on 26 Mar 21 was dominated by the North while the South East had the fewest candidates. It is pertinent to state that the Nigerian Army strictly complies with the Federal Character policy.

“Accordingly, an equal number of eight candidates were selected from each state of the federation except in rare instances where a state did not have the required number of eligible candidates to fill its eight vacancies. In such instance, the vacancy will be filled by a contiguous state from the same Geopolitical Zone.”