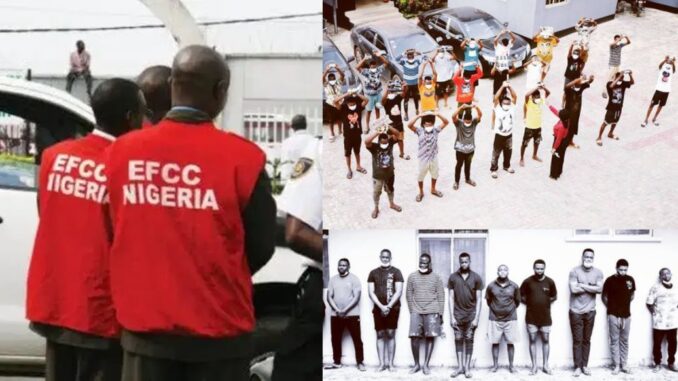 The suspects were arrested in separate operations in Ibadan, Oyo State, and Lekki, Lagos State.

The Head of Media and Publicity of the EFCC, Wilson Uwujaren, disclosed this in a statement on Thursday.

Twenty four of the suspects, most of whom he said claimed to be undergraduates, were nabbed on Thursday at their hideout in the Apete area of Ibadan by operatives from the Ibadan zonal office of the agency.

The EFCC spokesman said the suspects volunteered useful information and would soon be charged to court.

According to him, the remaining 10 suspects were arrested by operatives of the Lagos zonal office on Wednesday on Horizon II Estate, Meadow Hall Way, Lekki, Lagos, following credible information on their alleged criminal activities.

Others are Michael Obinna, Sanni Azeez and Ridwan Songonuga.