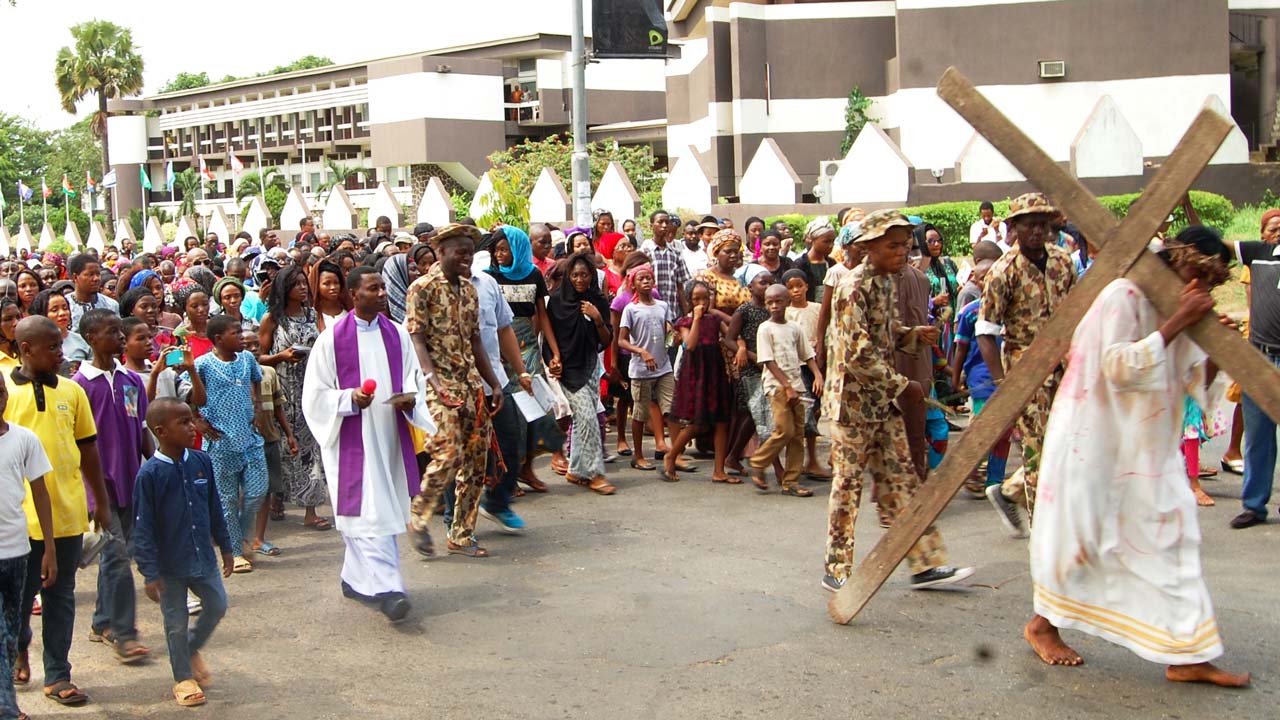 The Holy Week for Christian faithful has reached climax with the observance of Good Friday today, which heralds Easter Sunday, commemorating the crucifixion and resurrection of Jesus Christ respectively.

Unlike last year, when Easter was a victim of the lockdown, church leaders are looking forward to a different second consecutive year of pandemic Easter.

Last year, there was no in-person Easter service and it was a quick scramble by pastors and priests to put together an online service where congregants hooked up virtually. This year, it is expected to look a lot more normal and that is what is most exciting for church leaders.

Due to declining numbers of confirmed COVID-19 cases amidst ongoing nationwide vaccination, there has been a subdued adherence to the safety protocols and tepid enforcement of the regulations.

For instance, ahead of the Yuletide celebrations when the nation was on the verge of a second wave outbreak of Coronavirus, enforcement was in top gear to limit public gatherings, bars and nightclubs were shut down and religious houses were under instruction not to accommodate more than 50 per cent capacity while services lasted a maximum of two hours.

In fact, across many states, the cross over service to usher in the New Year was banned as many faithful opted for the virtual service. But it is a more lax COVID-19 environment now, giving room for the return of church events, retreats and programmes.

According to a faithful, Olawale Ogunyinka, who looks forward to an enjoyable Easter, the past year of socially-distanced and streamed services had an impact on the church community. “Older congregants really missed physical contact, fellowship and communication with church friends, but the new freedom with many already taking jabs of the COVID-19 vaccine has heightened the new positive spirit,” he said.

In anticipation of large crowds for this year’s Easter services, an official of the World Health Organisation (WHO), Ahmed al-Mandhari, WHO Regional Director for Middle East, yesterday warned of a possible surge in Coronavirus infections during the Easter holiday and the Islamic month of Ramadan.

Ramadan, where Muslims abstain from eating and drinking from dawn to dusk for one month, is scheduled to start around mid-April. Muslims usually celebrate by large social and religious gatherings, such as mass prayers, where mosques are traditionally packed.

Also, a note of caution came from the Africa Centre for Disease Control and Prevention (Africa CDC), yesterday, saying now that Africa was facing a third wave of the COVID-19 pandemic, the continent should remain ever resilient. The director of the Africa CDC, Dr. John Nkengasong, during the weekly virtual news briefing, said: “The continent is slowly moving towards a third wave. I strongly appeal to African nations not to relent. We have to remain resilient and deny the opportunity for the virus to spread.”

In terms of vaccine supply and distribution, Nkengasong said 400 million doses of vaccines would be received from Johnson & Johnson, making it the largest supplier to Africa.

“That would take us to almost half of the population that we are targeting,” he said, adding that there were ongoing talks to import the BioNTech/Pfizer and Sinopharm vaccines.

Scores of travellers, some of them students, were observed at Lagos and Abuja airports searching for overpriced seats that are unavailable. The Guardian learnt that the seat scarcity across the route network was not unconnected with low fleet capacity facing local carriers.

Market survey, as at yesterday morning, showed most of the routes as fully booked for the day. The next day’s flights, where available, sold tickets for an average of N55, 000 – N70, 000 for each one-way Economy seats, and N100, 000-plus for Business Class.

Travel experts said the upsurge in both traffic and fares were due to the traditional Easter rush at this period where students and workers often travel for festivities.

Travel consultant, Sunday Olumegbon, said the rush was good for the struggling airlines, though expressed worry over capacity to meet the demand.

“I am convinced that the new resolve within the security personnel to make sure that insecurity in the country becomes part of our history will come to pass. We should not allow the antics of a few mischief mongers to fragment the unity and faith that the vast majority of citizens of this country cherish and believe in. As I have said before, we are better and stronger as one nation under God.”

Buhari in a statement issued by his Special Adviser on Media and Publicity, Mr. Femi Adesina, commended “the enforcement and military personnel who continued to confront evil-minded individuals through the darkest of nights to keep us safe.” He recalled that a year ago, “in most of our major cities, our celebrations were somewhat subdued, as we battled the effect of the deadly Coronavirus pandemic.

“The restrictions meant that our brethren could not attend traditional church services as they would have wished. I salute their resilience and understanding. Today, we are able to congregate and worship together, cautiously.”

Buhari acknowledged and appreciated the sacrifices of doctors, nurses and other frontline health workers, “who have made the difference in saving lives and ensuring the reduction of the spread of the virus.

Also, President of the Senate, Ahmad Lawan, has admonished Nigerians, particularly the Christian faithful, to exhibit love, hope and tolerance for their fellow countrymen as they celebrate Easter. Lawan stated this in a statement by his media adviser, Ola Awoniyi, in Abuja yesterday.

Lawan noted that Easter is one of the most important events in the Christian calendar, which is to celebrate the sacrificial death and resurrection of Jesus Christ. The Senate President urged Nigerians “To use the occasion to preach religious tolerance, love for our neighbours and commit to our civic responsibilities.”

A non-interdenominational group, Christian Conscience, yesterday, admonished all political and religious leaders in the country to allow Jesus Christ to intervene in the affairs of the nation. The group condemned the incessant killings of Nigerians by bandits and herders, urging the federal government to put all machineries in place to identify the sponsors of these hoodlums and bring them to justice.

On the regional agitation for breakup of the Nigerian nation, the group advised the agitators to follow the due process by allowing dialogue to resolve all issues. The release, which was issued after the group’s monthly meeting held in Lagos yesterday, was jointly signed by its new Acting National Chairman, Dr. (Mrs) Yetunde Akinluyi and the National Secretary, Rev. Dr. Kolawole Verralls.

READ  See Who Is To Be Crowned The Next Oniru Of Iru, Lagos State

POLICE operatives across the country are beefing up security ahead of Easter celebration. This is following apprehension over spate of kidnapping and banditry in the country. The Delta State Police Command boss, Mr. Mohammed Ari, said he has deployed 5,883 officers to ensure the safety and security of residents in the state during the celebration.

To forestall any security breach in and around Oyo State during the Easter season, the state police command has deployed over 5,000 officers to secure places of worship, recreation facilities and financial institutions. The command stated that this action became necessary in view of the forthcoming Easter celebrations where there is likely to be increased activities at these strategic areas.

The command in a statement made available through Olugbenga Fadeyi, public relations officer of the command, added that effective plans have also been put in place to police all entry and exit points and other parts of the state through aggressive stop and search.

BUT for citizens in Taraba State, it will be a subdued celebration for many following the non-payment of March salaries, in addition to the ongoing strike action by civil servants. The strike has led to the picketing of financial institutions in the state, which is also having adverse effects on business owners.

Operators of businesses told The Guardian that the non-payment of salaries has negatively affected businesses as the state is mainly a civil servant state.

Madam Elizabeth Ugoh, who deals on fabric materials, said “had it not been for the refusal of the state government to pay workers last month (March) salaries, coupled with the workers strike, which have led to the closure of banks, all these goods you are seeing in my shop would have since been disposed off in Easter shopping.”