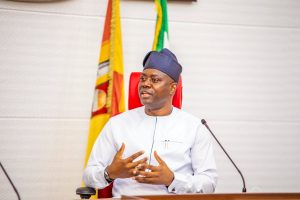 The PDP had fixed April 10 for the South-West congress of the party to hold in Ibadan, the Oyo State capital.

But Makine had warned the National Working Committee (NWC) of the party against postponing the congress again.

In a statement issued by his media aide, Taiwo Adisa, the Oyo governor warned the NWC against bowing to pressure to postpone the congress, saying such would be resisted.

Reacting, the Chairman of the South-West PDP Chairmen, Dr Sikirulai Ogundele, in a statement released on behalf of PDP chairmen in Ekiti, Lagos and Osun states – Otunba Bisi Kolawole, Adedeji Doherty and Sunday Bisi, respectively – said Makinde was free to leave the party.

The chairman said it is shocking that Makinde could insult “the custodians of the party just because they chose to obey an order of the court.”

The statement read in part, “Who cares if he chooses to leave the PDP this time, too? Is he not even already a sinking ship in Oyo State, placing members of the SDP and ADC (Action Democratic Congress) over and above those of the PDP?

“Without apologies, Governor Makinde can do his worse. He should stop threatening the party because he is not more a loyal and committed member of the party than people like us who stood by the party when he left.”

READ  Atiku vs Buhari: “You are too corrupt, greedy to lead Nigeria’ – Presidency mocks PDP presidential candidate
Share this Post[?]