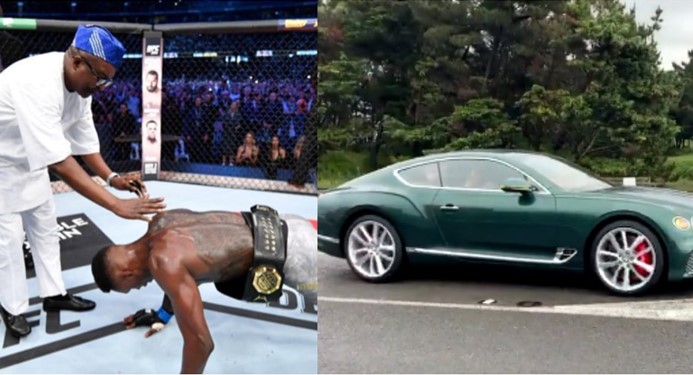 UFC middleweight champion, Israel Adesanya made the news again but this time for a good reason. The Nigerian-New Zealand martial artist purchased a brand new Bentley for his father, after he saw him admiring the car.

Taking to his social media page, the UFC star revealed that he got his dad the new whip, after he saw him admiring the car.

He also accompanied his social media post with a video of his dad admiring a Bentley online.

Upgraded my pops cuz he the realest on my team! I don’t wait for my loved ones to pass on before I give them their 💐 pic.twitter.com/HeIx6QlJRU

A BMW statement released to a sports magazine, Herald, read: “Due to the comments made by an athlete online, we have reviewed our pending association with the said athlete and we have decided not to push forward with a specific ambassador for the brand at this time in New Zealand.”

Style Bender in an Instagram post, admitted to his flop when he apologized for making the rape threat comment and stated that he has learnt his lessons on public engagement from it.