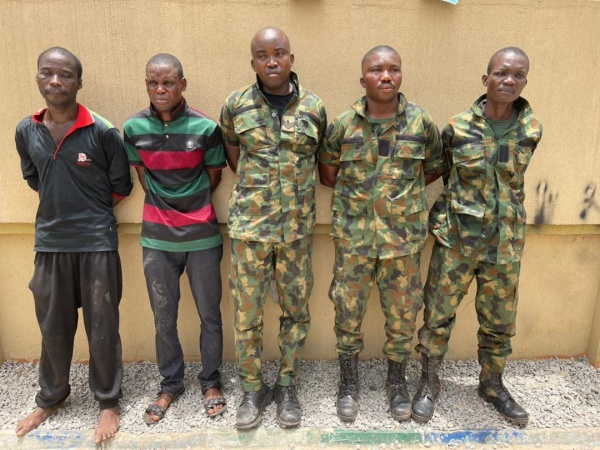 Troops of the 63 Brigade of the Nigerian Army in Asaba, Delta State, have arrested five persons including three suspected impersonators of the military along the Kwale-Ogwashi road in the state.

The other two suspects include a shabbily dressed serving mobile policeman and one accomplice dressed in mufti.

They were inside a black tinted, ash and blue coloured Peugeot 608 saloon car with registration number LND 436 EX (Lagos).

Assistant Director, Army Public Relations of 63 Brigade Headquarters, Asaba, Captain George Okupe who confirmed the arrest on Saturday in a statement, said the suspects were harassing commuters and disturbing public peace with the intention of kidnapping or robbing their victims.

Okupe gave the names of the suspects as “Sergeant Stanley Okolukw Agwuchi (F/NO: 505161) serving in Ogwashi Police Division age 32 years; Mr. Augustine Emmanuel age 28 years from Ejeme Aniogor in Aniocha South of Delta State who claimed to be a photographer; Mr. Nwaka Onyeachonen from Ejeme Aniogor parading himself as a Sergeant age 36 years; Mr. Uzamaka Julius impersonating as a Major with a fake Army identity card age 29 years from Obowu in Imo State; and Mr. James Benefit from Abia State parading himself as a private soldier age 28 years.”

Okupe recalled that on March 28, 2021, one Mr. Ogodo Gideon Mr. Onovughegor Augustine were arrested during a raid by the Brigade in Ogbolu community, Oshimili North LGA of Delta State.

“The suspects were parading themselves as Military men, while their accomplice took off on sighting the presence of the Raid Team.

“During preliminary investigation, it was discovered that Mr. Ogodo is a deserter private soldier while Mr. Onovughegor is suspected to be an internet fraudster,” he added.

He said the suspects were handed over to 63 Brigade Provost Company (Military Police) for further investigation.