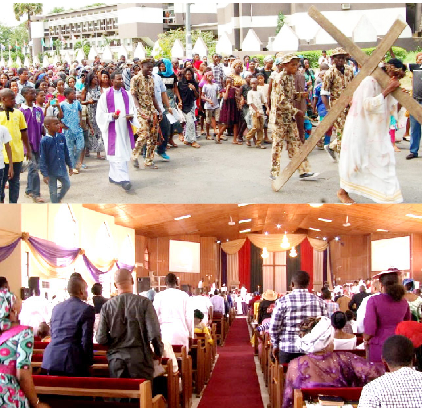 Holidays, feasts and fasts are a significant part of Christian religious practice. And some Christian holidays have come to have a considerable impact on culture and tradition.

Whereas the birth of Jesus Christ would seem like the biggest event on the Christian calendar, it is argued that as far as Christian celebrations go, Easter is equally big.

Easter is a celebration of Christ’s resurrection from the dead. It is preceded by Palm Sunday, and Good Friday. The 40 days prior to Easter form the Lent season, a time of fasting and repentance.

Today, the world is celebrating Christ’s resurrection. The question therefore is , how do people celebrate Easter and what was it like before?

The Bible makes it very clear that on the third day after Christ’s death, He rose bodily from the tomb and showed Himself to His disciples. To those who affirm the authority of the Bible, this is not a matter of conjecture, but of certainty. It is, moreover, of crucial importance. In fact, in 1 Corinthians 15, St. Paul makes it clear that our Lord’s resurrection is a central component of the Gospel. If Jesus Christ did not rise bodily from the dead, St. Paul tells us, then our faith is in vain.

63-year-old Mrs Ekenwa Bartholomew , a mother of five is a Catholic and says that in the past, people celebrated Easter Sunday with a lot of excitement.

“First of all, well before the D-day, parents would teach their children sober songs about Jesus Christ’s resurrection such as “ Jesus paid my debt , Amazing grace , how sweet the sound, among others. Families used to buy new clothes for the day as a sign of happiness,” she says.

She adds, “Families had to prepare stew and different foods and invite their friends from all corners to drink, dance, and be merry. It was and will always be a very special day for Christians.”

Mrs Bartholomew says that it was a taboo to eat meat on Good Friday, at least back then.

During Lent, Christians were expected to seek forgiveness for their sins through penitence and to miss mass on Easter Sunday was a shame, she says.“If you missed church on Easter Sunday, it was a shame and society would judge you like you’d committed a crime,”

How Is Easter Celebrated Today?

Mrs Rejoice Philip Isogon,, says that modernity has changed Easter preparations and celebrations.“Easter Sunday today is like any other day. Families’ no longer get together to celebrate the day and people seem more interested in doing other things.”

Isogon lamented that technology has taken over and that now, Christians follow everything on the Internet. That’s how they communicate with loved ones rather than spend time with them. Some listen to the radio on Easter Sunday to find out how mass was, or listen to Easter songs on their smart phones.

“Parents used to encourage their children to value Easter which isn’t the case today. You rarely find churches fully packed on that day, Sadly, many have joined different religions that do not recognise the day,” she added .

According to the District Superintendent of Abuja South , Assemblies Of God Church, Rev Kelechi Augustine, Easter Sunday preparations and celebrations have changed drastically.

“Christians in past had a different life from today. Christians in the past were strong in their faith and used every opportunity to show it. Easter was one of the days they celebrated most. Today, you can’t find such, maybe a few to be fair, but the excitement is gone,.”

READ  Video: Policeman In Shock After Finding Out The Woman He Took Home For 'Fun' Is A Man

Pastor Emmanuel Major of the Lamb of God Bible Church said Easter for one thing proved Jesus Christ to be the Messiah. Most Jews at the time believed in a coming Messiah, the great Redeemer of Israel, as the Old Testament had predicted; but, like most Jews today, they did not believe that Jesus Christ was that Messiah.

This is one main reason why they cooperated with the Romans in crucifying Him. But a minority of Jews, and increasingly many Gentiles, correctly identified Jesus as the Messiah. This is what Jesus Himself taught about Himself.

Second, Christ’s resurrection signaled His triumph over satan, sin, and death. In the garden of Eden, God had threatened death to Adam as a penalty for sin. St. Paul taught that the “wages (payment) of sin is death.” Christ came into the world to put away sin.

In His death, Jesus Christ paid the penalty for man’s sin. He was a sacrifice, or substitute for sinners. In this way, He paid for their sins. He released the stranglehold by which sin gripped mankind. His resurrection was both a proof and a continuation of this victory over sin. Death did not have any power over Him, because He had defeated sin, which gave death its power. He had to die in order to pay the penalty for sin; but He could not remain death, because He had destroyed the power of sin in His very death.

Third, our Lord’s resurrection was the initial phase of His present exaltation. This is made abundantly clear in St. Peter’s message in Acts chapter 2. God demonstrated Jesus Christ’s Lordship when He raised His Son from the dead. Christ ascended into heaven and presently sits on the right hand of God the Father.

All those who place their faith in Him are translated into His spiritual kingdom.

This kingdom is not just heavenly. It has drastic implications for the present life. Our Lord’s goal is not simply to prepare man for heaven, but to progressively redeem man and the rest of His creation. St. Paul tells us that Christ will reign upon His throne until all of His enemies are subdued.

This is not some sort of utopian political programme, but the spiritual work of the Gospel in the hearts of redeemed men. Jesus Christ subdues man not by the power of the sword or guns, but by the gentle, loving power of the Gospel. This re-orients men’s present lives, and little by little they re-orient society itself. This is a chief work of the present, resurrected Christ. It is not limited to a future heavenly home for the redeemed (blessed though this is), but it is a work of present redemption of cosmic scope.

These things and much more, we Christians celebrate this Easter.