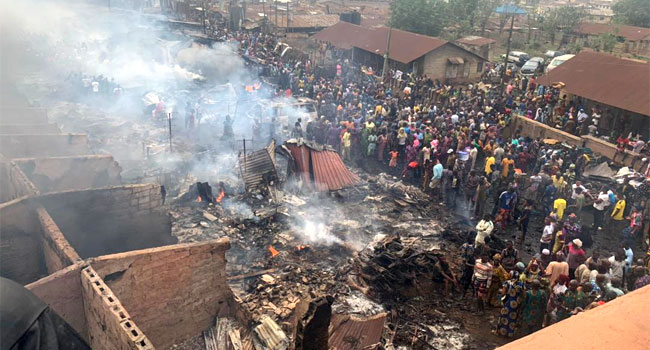 Over 100 shops and property worth millions of naira have been destroyed at the popular Araromi Auto Spare Parts Market,.Agodi-Gate, Ibadan, the Oyo State capital.

Our correspondent gathered that the inferno started in the market in the early hours of Saturday April 3, 2021.

Eyewitnesses revealed that the inferno started at midnight and the fire was still raging with fury when LEADERSHIP Sunday visited the scene.

Though distress calls were made to the Oyo State Fire Service, the timely response of the fire fighters, however, could not stop the inferno as the road to access the scene had been blocked by auto spare parts that were dumped on the road.

The two teams of fire fighters that came to the market parked their trucks at the nearest place to the scene and dragged their water hoses to battle the inferno.

But could not really do anything tangible to stop the fire based on lack of access and their water hoses could not get to the scene.

The traders that came to the market were seen packing off the spare parts on the road in order to clear the way for the fire fighters to get to the scene and quench the inferno.

As at the time the first fire truck accessed the scene, the fire had destroyed shops and goods in them for eight and half hours.

According to some traders, the fire was caused by a power surge in one of the shops in the market, adding that the market just had electricity supply restored recently after years of being without light.

A resident of Agodi-Gate, Pelumi Abdullahi, said: “As I gathered, the fire started around 12 midnight and is still burning as at 8:30am today. My Uncle’s shop is among the burnt ones. Everything he has in the shop has been burnt. He is betraying emotions now. He does not know where to start again,”