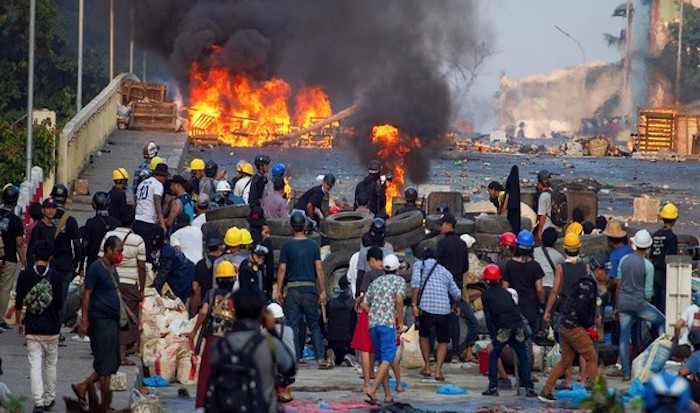 Security forces in central Myanmar opened fire on anti-coup protesters on Saturday in violence that a human rights group said has killed 550 civilians since the February 1 military takeover.

The Assistance Association for Political Prisoners activist group said security forces have killed 550 people, 46 of them children, since the military overthrew an elected government led by Aung San Suu Kyi. Some 2,751 people have been detained or sentenced, the group said.

At least two deaths were reported on Friday; with several more reported yesterday, including in Monywa, the largest city in the Sagaing region. Yesterday marked one week since the deadliest day of the anti-government protests.

In Mandalay, there were reports of security forces opening fire at protesters and destroying barricades.

Despite the repression, opponents of the coup march every day in cities and towns across the country, often holding what they call “guerrilla rallies” – small, quick shows of defiance before security forces can respond.

Photos posted on social media showed hundreds of people marching against the military government in the southern city of Dawei in Tanintharyi region yesterday.

“The protesters are still very determined to get out. In some places they are going out very early in the morning, in other places they are going out on motorbikes to disperse quickly, trying to give themselves an easy exit when the security services come after them,” Al Jazeera’s Tony Cheng, reporting from Bangkok, said. He added that “They are definitely not stopping their protests.”

Overnight, people also gathered for candle-lit vigils but the huge rallies that drew tens of thousands in the early days of defiance have largely stopped in big cities.

Attempts by Myanmar’s military to end dissent are turning to the virtual world with internet censorships and arrest warrants for online critics as big rallies become rarer in the face of a relentless deadly crackdown by security forces.

The authorities, who had already shut down mobile data in a bid to stifle opposition, ordered internet providers from Friday to cut wireless broadband, depriving most customers of access.

Authorities also issued warrants for 18 show business celebrities, including social media influencers and two journalists, under a law against material intended to cause a member of the armed forces to mutiny or disregard their duty, state media reported late on Friday.

All of them are known to oppose military rule. Actress Paing Phyoe Thu said she would not be cowed. “Whether a warrant has been issued or not, as long as I’m alive I’ll oppose the military dictatorship who are bullying and killing people. The revolution must prevail,” she said on Facebook.