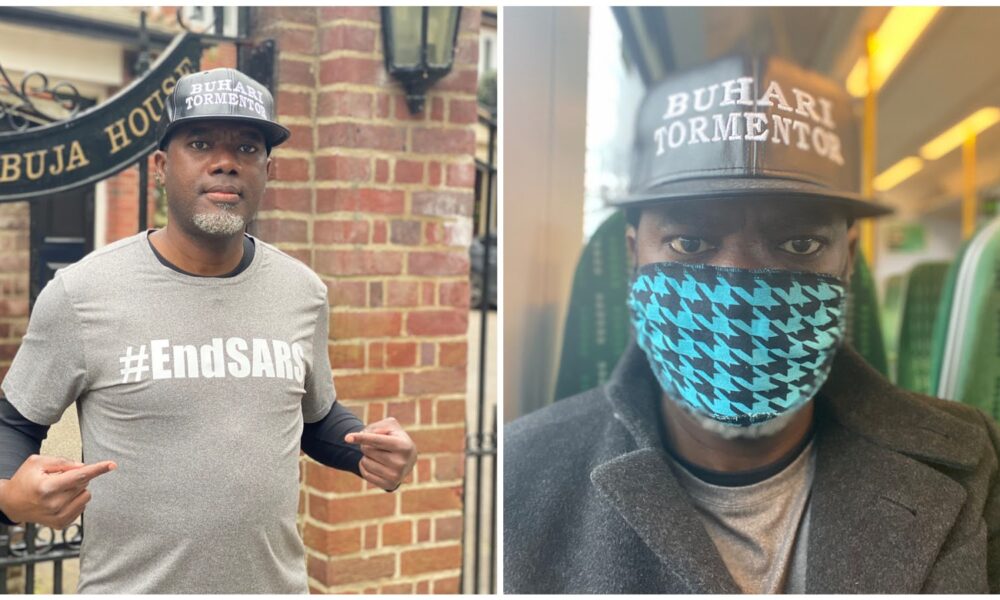 The President is currently in London where he is expected to spend two weekks to enable him to undergo a medical check-up.

Reno Omokri, a former presidential aide, has given reasons for initiating #HarassBuhariOutOfLondon protest.

It had been reported that some Nigerians staged a protest on Friday at the Nigeria House in London against the President, Major General Muhammadu Buhari (retd.), medical trip.

The President is currently in London where he is expected to spend two weekks to enable him to undergo a medical check-up.

The former presidential wondered why Buhari failed to build a standard hospital in Nigeria.

Among other reasons, according to Omokri, that led to the protest were the shooting of #EndSARS protesters by soldiers and Nigeria’s unemployment rate.

He said other Nigerians in London joined the protest because they were also uncomfortable with the situation of things in their country.

Omokri said, “I flew into London on April 2, 2021 to lead the #HarassBuhariOutOfLondon protest, and I went there straight from the airport.

“I did not eat, sleep, shower or rest. The President’s people called the City of London Police on me, and I was questioned. At the end of the questioning, which was streamed live to my followers, they announced with their mouths that I had committed no crime and that my protest was peaceful, orderly and within my rights.

“In fact, after General Buhari’s people called the police on me that afternoon, I calmly asked the officer questioning me this question:

‘’Officer, has Her Majesty, Queen Elizabeth II, ever come to Nigeria to access healthcare? So, why should you be called on me when I am asking my President to return to Nigeria to use our hospitals?

“The police officer was touched. He told me I was within my rights and flashed the thumbs up sign, and allowed the #HarassBuhariOutOfLondon to continue. Buhari’s people failed big time!

“So, why did I decide to initiate this protest at great personal expense and risk? It is because I believe that General Buhari is not running a government. He is running a criminal enterprise.

“This man has been in office for five years. In that time, has budgeted over N10 billion for the Aso Rock State House Clinic. This is the equivalent of $27 million. Is that not enough money to build a hospital and train doctors to treat him and other Nigerians? Yet, his wife, Aisha Buhari, admitted that that clinic cannot even provide ordinary paracetamol. Google it.

“However, that was not my main reason for initiating the protest. I did it really as a way of seeking closure for the victims of the EndSARS protests, because General Buhari’s spin doctors are going around town misrepresenting the US State Department’s human rights report as a vindication that the Lekki Massacre did not happen.

“That is not what the report states. Please read it yourself. The report states that the US was unable to independently verify what happened because the Nigerian authorities prevented anyone from obtaining the facts of the matter.

“The report also said that while Amnesty International revealed that ten people died, the Federal Government said no one died, with the Lagos State Government saying only two people died and that that controversy makes it impossible to establish what really happened.

READ  Lady Flogs Her Mother Mercilessly After Her Pastor Told Her That She’s A Witch. (photos & video)

“Finally, the report said that at least one corpse was found riddled with bullets and that they could confirm. They also said that another corpse was found with “blunt force trauma”. Nowhere in that report did the US State Department say that the massacre did not happen.

“How did Buhari reward us? He sent soldiers to Lekki to kill peaceful, unarmed #EndSARS protesters. These are the children of the men and women who prayed for his son.

“Now, after killing peaceful, unarmed EndSARS protesters asking for good governance, he is in London to secure his life and enjoy the benefits of good British governance. My conscience could not stomach it. I had to play my part in the effort to send the coward back home to fix the mess he created.

“Only five per cent of Nigerians are covered by a doctor. This man forced himself on Nigeria. He promised he would do better than his predecessors, but he has turned Nigeria into the world headquarters for extreme poverty. He has bequeathed us the highest unemployment in the world at 33 per cent.

“We have the highest number of out of school children at 13.5 million. And having destroyed our economy, he has run to a London that is on COVID19 lockdown to restore his health.”