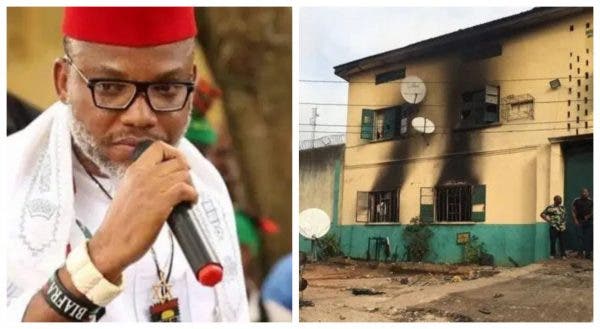 The leader of the Indigenous People of Biafra, Nnamdi Kanu, has said that nobody deserves to be in any of the country’s prisons.

In a tweet via his Twitter handle on Monday, the secessionist also condemned the federal government for releasing and rehabilitating arrested killer herdsmen and Boko Haram insurgents.

Kanu said if bandits and insurgents can be released and rehabilitated after they have been arrested, no Nigerian deserves to be in prison.

“If Miyetti Allah terror herdsmen & other murderous #Fulani groups, including Boko Haram insurgents, can be arrested, freed and rehabilitated by this neo-colonial Fulanised @NGRPresident, then no single soul deserves to be in any prison in Nigeria. If you know you know! #UGM,” he wrote.

Kanu’s post comes hours after unknown gunmen on Monday broke into the Owerri Correctional Prison in Imo State and freed over 1,500 inmates.

The gunmen also invaded the Imo State Police Command headquarters and burn down vehicles parked on the premises.

Also, the gunmen were said to have sung solidarity songs at the Government House Roundabout for about 30 minutes before attacking the facilities.

He, however, assured the people of the state that the security agencies were on top of the matter.