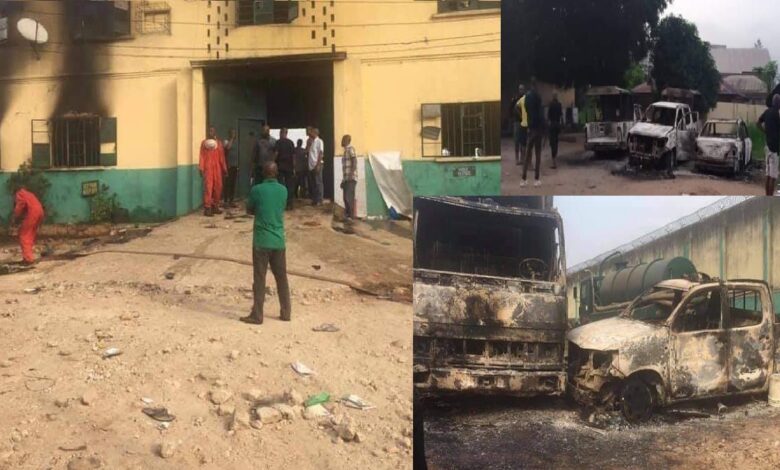 In the early hours of Monday, unknown gunmen have attacked the Nigerian Correctional Services in Owerri, Imo State and freed no fewer than 2,000 prison inmates.

Newsflash Nigeria learnt that the gunmen operated in over 10 vehicles, and also attacked soldiers stationed at Umuorji along Owerri–Onitsha Expressway.

They were said to have operated from 1 am till 3 am during which they sang solidarity songs at the Government House Roundabout for about 30 minutes before attacking the facilities.

The attackers were said to have had a free rein during the operation that lasted about two hours.

Newsflash Nigeria learnt that the gunmen caused panic in the town as explosions were heard around the state police command headquarters and the NCC facility in Owerri.

“There was a jailbreak at the Owerri Correctional Centre around 4am after the gunmen struck. Soldiers have been called in to secure the facility but several inmates have fled,” a source reported.

“It was so loud hearing the sound from two miles away from prison but I thought it could be a burial wake keeping but to my greatest surprise, my phone rang and it was my boss calling to know if I was at the headquarters which was negative because I was already at home.

“Gunmen suspected to be members of Eastern Security Network were the ones who attacked the Imo State prison and set prisoners free before extending their onslaught to the police headquarters, Owerri and setting some sections ablaze. It happened around 1:40am and lasted for one or two hours at the heart of town,” another security official said.

The attackers were alleged to be operatives of the Eastern Security Network set up by the proscribed Indigenous People of Biafra but this has not been established yet.

In a video clip obtained by Newsflash Nigeria, the police station was set on fire by the gunmen as gunshots were still being fired.

This is the fifth attack on police headquarters across the state.

Four police divisional headquarters had been attacked since February. They include Obowo, Aboh Mbaise and Ihitte/Uboma, divisions.

The gunmen invaded the divisional headquarters armoury and freed suspects in the detention facility and carted away arms.

It was gathered that the gunmen sacked police officers on duty, freed suspects, invaded the facility’s arms storage department before setting it ablaze.

It was also stated that the culprits did not flee immediately but stayed by and supervised the burning of the police facility.

When contacted, the Police Public Relations Officer in the state, Orlando Ikeokwu, confirmed the attacks.

Also, the Imo State Command of the Nigeria Correctional Service confirmed the attack on its facility.

The Public Relations Officer of the Service, James Madugba, told journalists that the authorities were still trying to get the accurate data of inmates who escaped and the level of devastation caused.

He explained that details will be shared as soon as accurate information and data is collected.

According to him, no figure has been given on the number of casualties because there was a gun battle between the police and the gunmen.

However, it was observed that there was a lifeless body on the ground in front of the correctional centre.

The deceased is suspected to be a fleeing inmate because he was hit by a bullet while carrying his travel bag.

No fewer than 50 cars were set ablaze in the process.

More than 3,000 inmates escapes during the reported prison break in Owerri, Imo state as the state's CID is set ablaze.
pic.twitter.com/737eqTGr0G