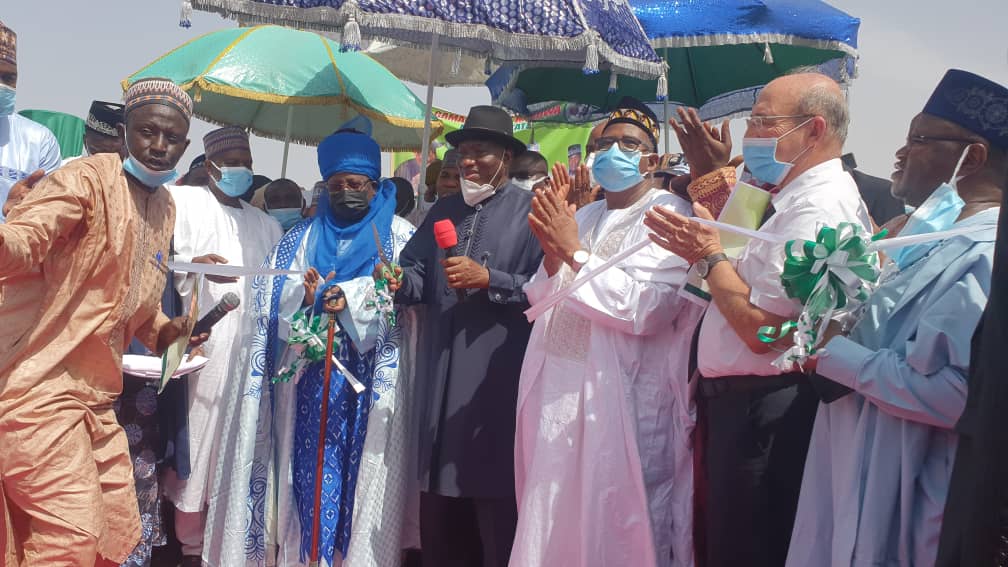 Former President of Nigeria, Dr. Goodluck Jonathan has lamented the difficulty in making headway in Nigeria without knowing some well connected or powerful persons.

He noted that the system works in such a way that every position including leadership posts are based on who you know and not your ability to deliver.

The former President however noted that it ought not to be as merit should not be sacrificed on the altar of nepotism, ethnicity and favouritism.

Jonathan made the submission on Tuesday during a one-day working visit to Bauchi State where he commissioned a road project named after him by the state governor, Senator Bala Mohammed.

Buttressing his point that appointments should be based on merit, Jonathan explained that he didn’t know Mohammed personally when he made him the FCT Minister while he was president.

He said: “Yes, I did not know him when I met him and made him the FCT Minister. In Nigeria, we have this tradition where some people feel that some Ministries are big and juicy and must be given to a special person or that you have to know someone before you give him a responsibility role or put him somewhere. It is not like that with me, it is not my way of doing things.

“Today is a happy day for me because since I left office, this is the first time I am coming to Bauchi, first let me use this rare opportunity that I am before the Emir of Bauchi to thank the people of Bauchi for supporting my dear son, you have done very well to support him. It would have been difficult for him to win the election without your support.”

“Bala Mohammed is a good younger brother, he is a good son, even when he was the FCT Minister, he worked with commitment and I gave him a free hand to run the affairs of the FCT. I’ve come to visit him and to commission a project and a road that was even named after me.”

Speaking earlier before the reaction by Jonathan, Governor Mohammed had while introducing the former President to the Emir of Bauchi, said: “Your Highness, I am the happiest man today standing here, today history is been made. Somebody who is instrumental in my coming to the limelight in Nigeria is here with you.

“He came from Yenogoa in Bayelsa State, somebody I don’t have anything in common with other than the stake of nationalism and Nigerianess. He made me the Minister of the FCT without knowing me or belonging to the same political party, he has really impacted so much, he gave me responsibility and by so doing he has proven that he is a detribalized Nigerian.”

“The way and manner he left government and created impression globally in terms of democracy made me proud that I have a father and a mentor who is the face of democracy in Africa. Today, he is coming to our house, this house that we all respect in Bauchi and in the whole country. This is the house of the Areonakakanfo of the North.”

In his remarks, the Emir of Bauchi, Dr Rilwanu Suleiman Adamu declared that he and the entire traditional council are proud of Jonathan.

The Monarch said: “This is the fourth time you are visiting this Palace officially, we in Bauchi State are proud of you.”

The Emir added that Jonathan’s actions as described by the Governor show that he is a detribalized Nigerian.