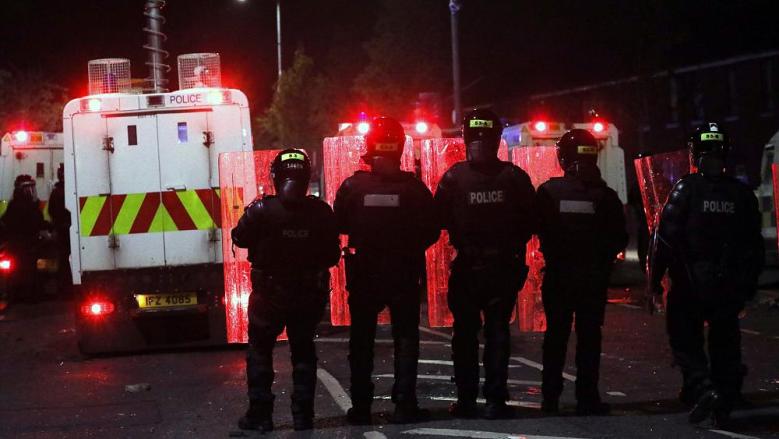 Pro-British loyalist militants in Northern Ireland said on Friday there had been a “spectacular collective failure” to understand their anger over Brexit and other issues as there was some respite in street clashes following a week of riots.

Despite appeals for calm from London, Dublin and Washington, the nightly unrest in pro-British areas spread further into Irish nationalist parts of Belfast on Thursday, where police responded to petrol bomb and stone attacks with water cannon.

A number of loyalist protests planned for Friday night were postponed in what posters put up in pro-British areas said was a mark of respect for Queen Elizabeth and the Royal Family following the death of her husband, Prince Philip.

However some masked individuals threw bricks and missiles at police in a loyalist area of Belfast where television footage showed a British Union Jack flying on a flagpole nearby.

The clashes have been some of the worst violence in Northern Ireland in years and have raised concern about the 1998 peace accord that largely ended three decades of sectarian and political bloodshed during which 3,600 people were killed.

The Loyalist Communities Council (LCC), which says it speaks for the Ulster Volunteer Force, Red Hand Commando and Ulster Defence Association militant groups, said it was not involved in the riots and it called for calm.

However it warned in a statement that border arrangements with EU-member Ireland must be negotiated.

The loyalist paramilitaries, as they are known, laid down their weapons in the years that followed the Good Friday Agreement. But the LCC said Unionist anger had been misunderstood.

“To date there has been a spectacular collective failure to understand properly the scale and nature of Unionist and Loyalist anger,” it said.

The council cited concerns over post-Brexit trade barriers as well as policing following a decision last week not to prosecute Irish nationalist rivals Sinn Fein for an alleged breach of COVID-19 regulations at the funeral last June of a former IRA leader.

After the United Kingdom left the European Union at the start of this year, checks and tariffs were introduced on some goods moving from mainland Britain to Northern Ireland as the province now borders the bloc via EU member Ireland.

British Prime Minister Boris Johnson had promised there would be no hard border between Ireland and Northern Ireland as a result of Brexit, and unfettered trade between the province and the rest of the United Kingdom would continue.

But critics of the departure deal’s Northern Ireland Protocol say a border is now in effect in the Irish Sea, leaving unionists, who want to stay in the United Kingdom, feeling betrayed.

“We have repeatedly urged HM Government, political leaders and Institutions to take seriously our warnings of the dangerous consequences of imposing this hard border on us and the need for earnest dialogue to resolve matters. We reiterate that message now,” the LCC said.

A new protocol must be negotiated, it said.

Police do not believe the violence is being sanctioned or organised by paramilitary groups, though they said on Friday that some with connections to those groups may have been present at the clashes.

Sinn Fein leader Mary Lou McDonald said she feared the protests could set the tone for a violent summer when thousands of pro-British Protestants hold marches, a tradition the mainly Catholic nationalists who want to be part of a united Ireland see as provocative and often lead to clashes.

“We have communities that are bracing themselves perhaps for a very difficult weekend, deep concerns that violence might extend further and that this might set the tempo and the scene for this summer,” McDonald told Irish national broadcaster RTE.

The United States, which has traditionally taken a close interest in Irish matters, on Thursday warned that the Good Friday Agreement which it helped broker should not become a casualty of Brexit.