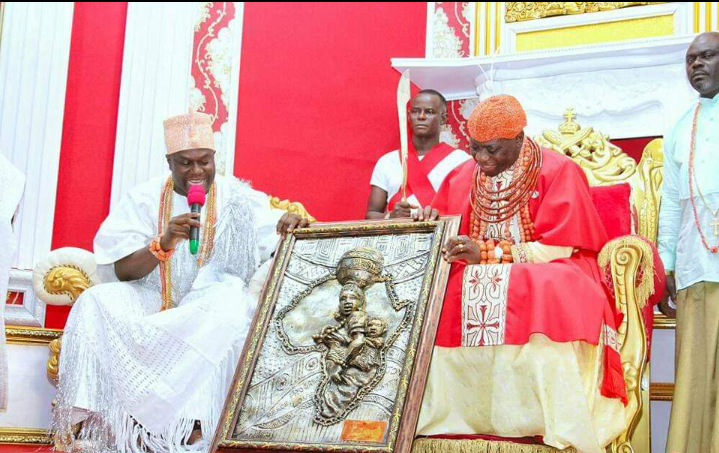 His Imperial Majesty, Oba Adeyeye Ogunwusi, the Ooni of Ile-Ife has commended the Itsekiri for following norms, culture and tradition in the selection of Prince Tsola Emiko as the Olu-designate.

This was contained in a statement released by the Ooni of Ife through his palace Director of Media and Public, Moses Olafare.

The royal monarch also consoled the Itsekiri worldwide on the passage of the immediate-past Olu of Warri, His Royal Majesty Ogiame Ikenwoli.

He said the late monarch meant well for his people and was a great descendant of Oduduwa.

The Ooni said during his five years as Olu of Warri, the late Ikenwoli contributed immensely to the upliftment of the agelong relationship of the Itsekiri and Yoruba nations.

He said: “Ogiame Ikenwoli was a fantastic leader and highly respected member of the National Council of Traditional Rulers of Nigeria(NCTRN), so passionate about harmonious coexistence among the nations of the larger Oduduwa race worldwide, Yoruba, Edo and Itsekiri nations in particular.”

The Ooni commended the Itsekiri people for their adherence to norms, culture and inherited traditions in the selection of 37-year-old Prince Utieyinoritsetsola Emiko, as the Olu-designate.

“From the sacred throne of Oduduwa at Ile-Ife, we rejoice with Omooba Utieyinoritsetsola Emiko as the new Olu of Warri and Itesekiri people all over the world.

“We look forward to peace, concord and progress across Itsekiri land during the reign of the new Olu of Warri.

“All the descendants of Oduduwa all over the world look forward to a progressive reign of the new monarch,” the Ooni said.

The foremost monarch added that since the first Olu Iginuwa emerged several centuries ago, the Oduduwa dynasty has continued to build a cord of mutual respect and trust founded on timeless relationship, culture and an unbroken chain between the Yoruba and Itsekiri people.

He said the Itsekiri represent a formidable dominion in the history of the Oduduwa dynasty.

“We are proud of the blood-bound relationship among all the descendants of Oduduwa and our Itsekiri brothers and sisters.

“Our forefathers stood by each other in moments of thick and thin. They stood shoulder-to-shoulder as one indivisible energy. We hope to keep this precious gift they left for us. We cherish this important history.

“We shall guard and defend it to the good of the great civilisations of Itsekiri and Yoruba people, a memory that has survived decades of travails and trials.

“Peace and stability for the people of Itsekiri is our utmost desire. We want to see Itsekiri land witness more prosperity, more fertility, more harmony and peace of mind with their neighbours towards a more united Oodua race and better Nigeria,” the statement adds.

Also yesterday, a former lawmaker, Daniel Reyenieju, called for the continued unity of the Itsekiri people amidst the ongoing process of enthroning Omoba Tsola Emiko as the 21st Olu of Warri Kingdom.

He appealed to all Itsekiris and non-Itsekiris within the kingdom to ensure that the mourning period and restrictions declared for the 20th Olu, Ogiame Ikenwoli, are strictly adhered to.

Reyenieju, who is a member of Ginuwa I Ruling House of the traditional Warri Kingdom, expressed concern about the hiccups that characterised the emergence of Prince Tshola Emiko as the Omo-Oba (Olu –elect), describing it as strange within the context of the modern history of the Itsekiri.

He told our reporter: “Itsekiri has successfully put behind them this strange experience and are now forging ahead as a united and an indivisible group with common history with the Oluship institution encapsulating its ontological ‘beingness’.

“I was shocked, but fascinated with the overwhelming spirit of reconciliation and general acceptance of the Omo-Oba, Prince Tsola Emiko immediately the process got kick-started at Big Warri (Ode-Itsekiri) last week.

“Besides the joy which was accompanied by a sigh of relief right from the moment the Iyasere of Warri Kingdom, Chief Johnson Atseleghe formally announced the transmogrification of the former Olu of Warri, Ogiame Ikenwoli, which by tradition was accompanied by his declaration of mourning for three lunar months in Itsekiri lands.

“It is clear that all the dos and don’ts which all persons of Itsekiri extraction are expected to observe as signs and indications of mourning the exit of their Olu are now being observed such that all burial ceremonies, marriages, among others have been put off in all Itsekiri towns and villages.”