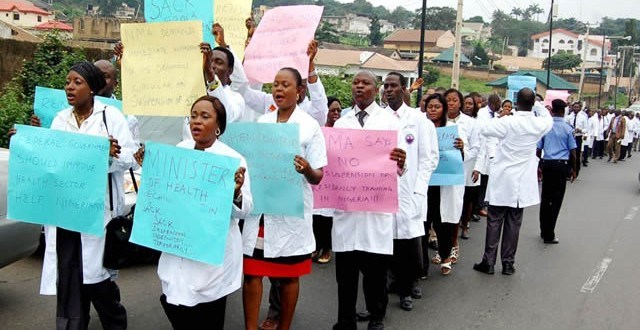 Health workers in Ogun State have declared their intentions to embark on a strike due to the alarming rate of insecurity in the state.

The doctors and nurses threatened to stop working if the state government fails to secure their lives.

NANNM Chairman, Roseline Solarin and NMA Chairman, Dr. Oladayo Ogunlaja, both confirmed the development, adding that the government was not taking actions to secure the lives of the health workers.

Ogunlaja said, “There is a lot of security challenges in the state now. I want the state government to address them before we go back to work.

“To make where we work a safe place so that we can work without any fear. The state is now becoming unsafe for everybody living in the state.

“We want the government to do the needful so that we will know that we are secured.”

Recall that unknown gunmen abducted another dentist after releasing two health workers including a doctor and nurse in Ogun State.

Reports have it that the gunmen kidnapped the doctor and the nurse on the Abeokuta-Imeko Road last week Wednesday and released them on Monday night.

In a twist of events, some gunmen also abducted another dentist on the same Monday night shortly after releasing the two health workers.