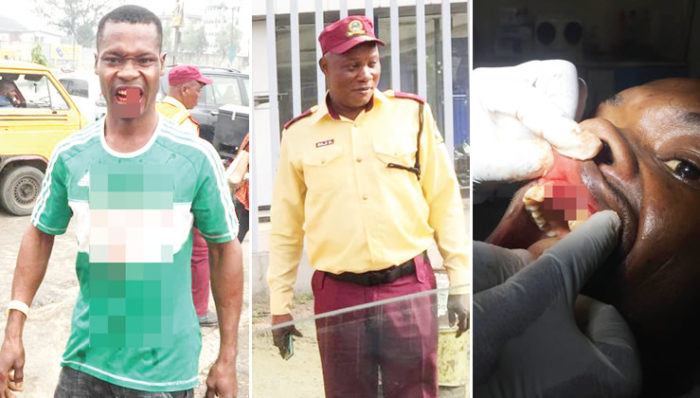 Six officials of the Lagos State Traffic Management Authority allegedly assaulted a driver, Michael James and knocked out two of his teeth on Lateef Jakande Road in the Ikeja Local Government Area of the state.

Recounting the incident, James explained that the officials arrested him for a traffic offence that he termed as illegal.

He said the officers pounced on him with the assistance of two hoodlums as they tried to force him out of his vehicle.

However, they abandoned him when they realized that he was bleeding, adding that he has spent over N80,000 on medical expenses.

He stated, “I drove through Lateef Jakande Road, three officials of LASTMA, two other guys and three armed policemen suddenly stopped me. I asked what I had done and they said I drove against the traffic. I had been plying that route since 2001 and no one had ever stopped me for driving against the traffic.

“I was still explaining to them when one of them attempted to forcefully remove the vehicle’s key; I pleaded with them but they overpowered me and pushed me out of the vehicle. The remaining officials and policemen started beating me, while I was on the ground and in the process, they knocked out two of my teeth and my gum was affected.

“I called my boss, who connected me with an official, who intervened and after realizing that the road where I was accosted was not one-way, they were instructed to release my vehicle.”

To confirm that he was not on the wrong side of the law, James drove through the same route with a facemask and asked a LASTMA official if the road was one-way and the official said no.

Meanwhile, the spokesperson for LASTMA, Olumide Filade urged James to make an official complaint with promise that the officials would be prosecuted if found guilty.