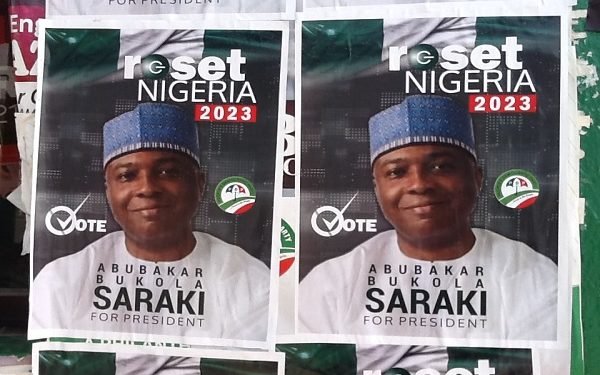 Presidential campaign posters of former Senate President, Dr. Bukola Saraki have been spotted in some strategic locations in Abuja.

According to observations by our correspondent, the posters emerged on Tuesday morning.

The 2023 campaign posters with his picture, seen in different locations in the capital city, had written on them “Reset Nigeria 2023”, “vote Saraki for president.”

The posters also had the logo of the Peoples Democratic Party (PDP) on them.

However, when contacted for a reaction, one of Saraki’s aides, Yusuph Olaniyonu denied any knowledge of those behind the posters.

He added that his principal doesn’t hide his intentions, noting that when it’s time to print posters, it wil be done openly.

“We know nothing about the posters you are talking about. Except of course, you (our correspondent) printed them.

“When it is time for Dr Saraki to print posters, he will not do so in secret. We will not hide to print posters so we should be the one to ask you for the identities of those behind the printers,” Olaniyonu said in a telephone chat.

Meanwhile, the Minister of Foreign Affairs, Geoffrey Onyeama, has said that ambassadorial appointments are based on merit and track records.

Speaking on Sunday at a send-off dinner in honour of Nigeria’s ambassador-designate to Qatar, Yakubu Ahmed, Onyeama said persons appointed as ambassadors must have a proven track record, experience, and professionalism in foreign service.

The minister noted that the appointments of Ahmed, outgoing director of protocol (DOP) at the State House, and other career ambassadors were based on the need to post dedicated and keen foreign service practitioners to serve as image-makers of the country.

He said Ahmed is going to head a very important mission in one of the richest countries in the world, hence the need for his appointment.