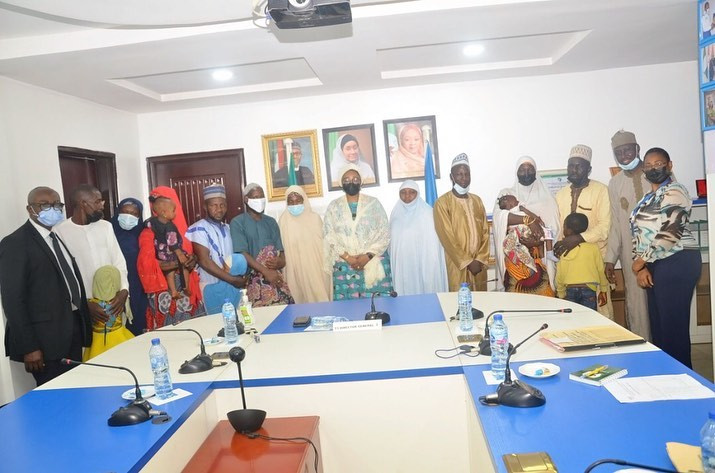 The National Agency for the Prohibition of Trafficking in Persons (NAPTIP) has reunited 5 rescued trafficked children with their parents.

The children between the ages of 4-7 were abducted at various times by one Musa Abdulrahman, and sold to unsuspecting women in different parts of the country in the guise of adoption.

Handing over the children to the very happy parents at the headquarters of NAPTIP, on Monday, April 12, the Director General, Imaam Sulaiman-Ibrahim, called on parents to ensure adequate protection of their children to avoid incidences of kidnapping, abduction, trafficking and other crimes against children.

She cautioned the parents on the need to watch their children closely and not to expose them to risk of being easily accessible to traffickers and other criminal minds.

Giving an account of how the children were rescued, the Director-General explained that operatives of the Agency mounted surveillance on the suspect who hails from Nkonni Enagi, Edati, Niger State for a while following intelligence reports that he kidnaps children from Niger State and sells them to some families in different parts of the country in the name of adoption.

The suspect, a 32-year-old Economics graduate from the University of Maiduguri, claimed to be a staff of the Ministry of Social Development of Niger State in charge of adoption matters and also issues the would be parents adoption papers purportedly from the Niger State Government.

Imaan Sulaiman Ibrahim further stated that luck ran out on him when through a sting operation by the operatives of Agency he was caught red handed while helping some ‘’clients’’ fill their adoption application forms and other papers.

He confessed to have kidnapped and sold six children under the guise of adoption. He further confessed that he started the kidnapping business in 2016 and that all his victims were from Niger State.

He also confessed to have forged some adoption documents which he issued to the people he sold the kidnapped children to. He further confessed that he collected the sum of 100,000 for each of the children.

All the six children have been rescued by the Agency while parents of five have been traced. Operatives are still making efforts to locate the parents of the last child. The suspect has also been arraigned in Court in accordance with the Trafficking in Persons (Prohibition) Enforcement and Administration Act (TIPPEA), 2015.

While promising diligent prosecution of the suspects, the NAPTIP Boss called on the general public to continue to assist the Agency with useful information that will lead to the arrest of child traffickers in the Country.

She also appealed to couples and other members of the public who are challenged and in need of children to endeavour to follow due process so as to avoid any problem arising from any form of illegality as children are not commodities to be sold at will.

In their response, cross section of the parent who were elated to see their children, thanked the Federal Government of Nigeria and Management of NAPTIP for rescuing their children and promised to take adequate care of the children.