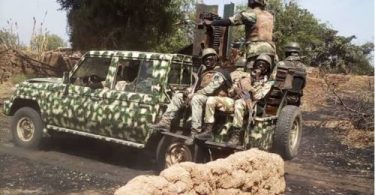 Damasak town, headquarters of Mobbar Local Government Area of Borno state, has been in the news over consecutive attacks in the area by the insurgents.

According to a report by SaharaReporters, a military source has revealed how the recklessness and rash decisions of Brigadier-Commander S. S. Tilawan allowed Boko Haram to launch attacks on Damasak that resulted in the killing of several civilians and forcing many to flee the town.

Damasak town, headquarters of Mobbar Local Government Area of Borno state, has been in the news over consecutive attacks in the area by the insurgents.

A military source in Borno told SaharaReporters on Wednesday that the town has been deserted as residents scamper for safety due to the incessant attacks by insurgents on the town.

According to him, only soldiers are left at the military base located in the town.

The source, who has been in Damasak for five years, said the town has always been dreaded by Boko Haram militants due to the heavy security the military provided for the town but the situation has changed.

The source called on the Borno State governor, Babagana Zulum and the new Chief of Army Staff, Ibrahim Attahiru, to immediately look into the security threat at Damasak with a view to resolving it.

He said, “Damasak town is empty, all the civilians in Damasak have pulled out because their security is shaking. We only have soldiers left in Damasak now.

“The civilians are lamenting seriously that since this Brigadier-Commander, S. S. Tilawan came, all these things started. The governor should come and see by himself and do something.

“We have been here since 2016 holding this ground, Boko Haram had never smelt this town but since this man came, he brought order of redeployment and the deployment was scattered, that’s why Boko Haram had the courage to enter Damasak. In Damasak town now, there is no civilian.

“The Chief of Army Staff should do something urgently to come and remove the 5 Brigade Commander, S. S. Tilawan and 145 battalion commander, one Lieutenant Colonel S. A. Ochalla.”

He said nine civilians were killed in Tuesday’s attack while four soldiers sustained injuries, noting that the soldiers had been taken to hospital in Maiduguri, the state capital for treatment.

The source expressed the belief that the new service chiefs want to bring an end to the insurgency in the region.

He said in his five years of service in the region, he had not seen the airforce work as much as they are doing now.

“I believe that Attahiru and the new Airforce chief are making efforts to stop the insurgency because in my five years in Maiduguri, I have never seen where jet fights like this but since these new chiefs came into office, the jet is always active.

“We see them in every attack and yesterday, they worked like able men. I know people like former chief of army staff don’t want this insurgency to stop. He has shed blood in this country. There was a time that over 250 soldiers died, and Tukur Buratai told the media that it was only 33 that died out of 200 plus. A half of a battalion died.

“In other countries, generals are like gods but in Nigeria, they use it as an opportunity to make money. Let the new chief of army staff try his best and end this insurgency. Anyone who ends this insurgency will be worshipped.

“Why is the new chief of army staff being interrogated? The person who was given $1 billion to buy the weapon, why couldn’t they invite or jail him and ask him about the money? Why are they asking someone who just took over office?

“The new service chiefs are really trying, for now, it seems they are really ready to put in their best to end the insurgency.

“But, people are still dying, soldiers are dying, though we didn’t lose any soldier yesterday but three soldiers were injured. They took them to Maiduguri this morning. The Boko Haram fighters suffered so many casualties but we couldn’t recover their dead bodies due to much firing; their body parts scattered. Their legs, heads went separate ways.

“The Boko Haram guys burnt some houses on Tuesday but the air force did a good job.”

An unspecified number of Internally Displaced Persons (IDPs) were also injured during the attack, according to Kolo.

Many residents had relocated to Maiduguri or into the town of Diffa across the Niger border following three previous attacks, but other residents decided to stay back.

On Wednesday, residents who remained left the town across the border following militants’ attack on Tuesday.

The fleeing residents wanted to seek refuge in nearby Gamari village across the border but were told that the jihadists had warned the villagers not to host anyone from Damasak.

A resident, who spoke with AFP said, “The insurgents went to Gamari last night (Tuesday) and gathered the people and warned them not to accept any humanitarian aid from NGOs and not to accommodate anyone from Damasak.

“The only option left to us is to go to Diffa where most of our kinsmen fled to in the past two days,” the resident said.

Late on Tuesday, the jihadists stormed Damasak, burning a divisional police station after a failed attempt to raid the base.

A resident, Mustapha Gashigar said eight people had been buried but other bodies had not been recovered, and 17 were seriously injured.

The military source who spoke with SaharaReporters said despite all that had happened, fighting between the jihadists and troops was continuing around the base.