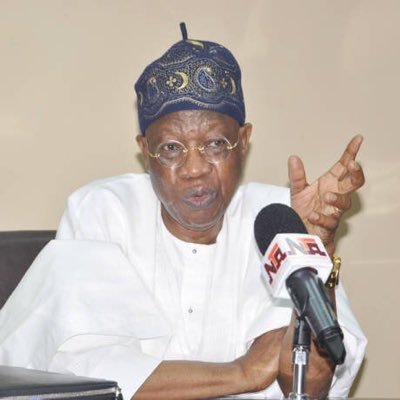 Nigeria’s Minister of Information and Culture, Alh Lai Mohammed has blamed citizens, saying they are the reason why Twitter went to Ghana.

The Minister of Information and Culture, Lai Mohammed has revealed why Twitter chose to site its Africa Headquarters in Ghana instead of Nigeria.

The Minister, while responding to question from Vanguard, said the decision by the US-based social media company to locate its African headquarters in Accra, Ghana was not a commercial and business one.

According to him, the unpatriotic attitude of some Nigerians, especially the media who he said have always struggled to outdo one another in painting Nigeria as a hell where no one can live contributed to Twitter’s decision to choose Ghana.

Mohammed argued that the natural expectation is that Nigeria should have been the hub of Twitter business in this part of Africa, given that fact that it has about 25m twitter users against 8m in Ghana.

“The natural expectation is that Nigeria should have been the hub of Twitter in this part of Africa, given that fact that we have about 25m twitter users against 8m in Ghana.

“Clearly, the decision was not a commercial and business one. But, in think Twitter has the prerogative and exclusive rights to decide where to site its headquarters.

“I hope this will serve as a lesson to Nigerians because all the reasons cited by Twitter for sitting its Headquarters in Accra, Ghana is that Ghana is champion of democracy, rule of law among other reasons.

“This is what you get when you demarket your own country. The fine time especially for the media is to find fault in their own country, most times exaggerate the challenged the country is facing.

“And at no time was this better seen as during the EndSars protest, where Nigerian journalists both traditional and new media were trying to outdo themselves in painting Nigeria as a hail, where nobody should live.

“They tried to vilify not just the government but the country. I thank God that the last US report vindicated the government that there was no corroboration to the claim that people were killed at Lekki Toll gate as against what majority of the Media were championing.”

“I think this will teach all of us a lesson that we have no country than Nigeria.

We are not saying you should not criticise the government but be fair and patriotic.

When you destroy your own house, where are you going to live?

But we destroyed it. Don’t forget that it is what insiders do that outsiders would use to judge us. Nigerians should learn better to manage the image of the country,” he added.

It be recalled that US-based social media company had on Monday announced plan to site its African headquarters in Accra, Ghana citing democracy, respect for free speech and respect for rule of law as some of the reasons for the choice of Ghana over Nigeria and other African countries.

Twitter CEO, Jack Dorsey, while announcing the proposal on twitter, announced that the company would be setting up a presence in Africa. “Twitter is now present on the continent. Thank you, Ghana and Nana Akufo-Addo,” he said.

In a statement, Twitter said, ” it is now actively building a team in Ghana “to be more immersed in the rich and vibrant communities that drive the conversations taking place every day across the continent.”

It indicated several roles, from product and engineering to design, marketing, and communications, for job openings in the company.

On his part, the Ghanaian President, Nana Akufo-Addo, said:

“The choice of Ghana as HQ for Twitter’s Africa operations is excellent news. Government and Ghanaians welcome very much this announcement and the confidence reposed in our country”.

He also revealed that he held a virtual meeting with Dorsey on the 7th of April, where the two parties might have finalized the deal.

“As I indicated to Jack in our virtual meeting on 7th April 2021, this is the start of a beautiful partnership between Twitter and Ghana, which is critical for the development of Ghana’s hugely important tech sector. These are exciting times to be in and to do business in Ghana,” he added.

According to Twitter, the decision to kick off its African expansion with Ghana stems from the country’s dealings with AfCFTA and its openness toward the internet.