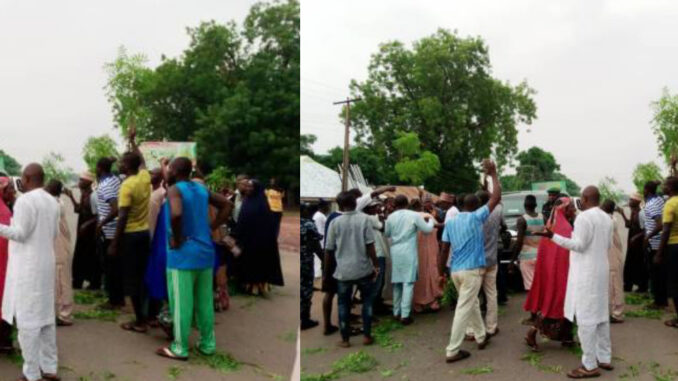 Akabe, alongside the embattled Council Chairman, Mr. Rabo Sani, had met with the workers to plead with them to remain calm.

According to a Daily Trust, some aggrieved workers in the Doma Local Government Area of Nasarawa State on Friday staged a protest over the non-payment of their two months’ salaries and the alleged disappearance of N20million deducted from their salaries by the Federal Mortgage Housing Scheme.

The workers blocked the convoy of the Deputy Governor, Dr. Emmanuel Akabe, who is an indigene of Doma.

Akabe, alongside the embattled Council Chairman, Mr. Rabo Sani, had met with the workers to plead with them to remain calm.

They had told the workers that the state government was doing everything possible to address their predicament but the protesting workers reportedly ignored their plea as they barricaded the road.

The road blockage began on Monday this week as they conducted “a special prayer” in the middle of the road.

The council chairman blamed his predecessors for the inability of the council to pay the workers, saying illegal employment of civil servants worsened the situation.

He said, “I did not employ a single civil servant, but my predecessors made a mistake by employing over 500 civil servants.”

However, he stated that the rationale behind the protest was due to the shortage of funds to pay workers salaries, noting that it is a statewide problem.

On the missing Federal Mortgage Housing fund, he debunked the rumour, adding that the Local Government borrowed the money to pay workers’ salaries.

“The money of Federal Mortgage Housing fund is not missing. Rather we borrowed the money to pay staff salaries, saying that all the Union leaders were aware of the transaction,” he said.

“What I’m saying, in essence, is that there was a consultation and agreement before we arrived at that.”

He said the 13 Local Government Councils of the state needed a sum of N2.1 billion to settle two months of staff salaries.