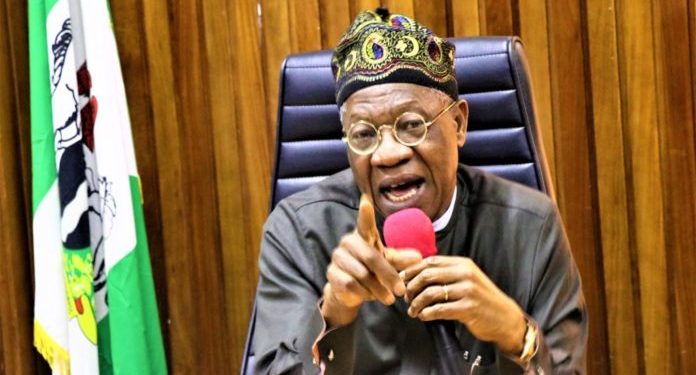 Lai Mohammed, the Minister of Information and Culture has appealed to Nigerians to shun promoters of secession.

The information minister also stated that those who support separation and secession would be the first to run away when any problem starts.

Mohammed also implored the citizens not listen to them as many of them have about four passports of other countries.

Speaking on Sunday in Lagos when he appeared on Bond FM radio programme, “Ibi Abasede”, Mohammed asserted that the Federal Government is working hard to improve national security and prevent secession tendencies.

Speaking on issues around security, Mohammed said the Federal Government’s efforts in that respect necessitated the Town Hall meeting on security held on April 8 in Kaduna.

According to him, the meeting brought stakeholders together to chart a way forward.

Mohammed said recommendations from the meeting, which had the theme, “Setting benchmarks for enhanced security and national unity in Nigeria’’, would be presented to the Federal Executive Council and state governors on Wednesday and Thursday.

He pointed out that what united Nigeria was more important than those issues threatening its continued existence.

“We were moved by security issues around the country and called for a meeting of all relevant stakeholders on April 8 in Kaduna.

“That we have ethnicity issues is not new. Indigenous People of Biafra (IPOB), Boko Haram and farmer-herders clashes are not new; all we must do is to look for the way forward.

“We are aware of them, the government is working. Secession is not the way out of our challenges. You don’t cure headache by beheading the patient.

“The things that unite us in Nigeria are more than what separate us,” he said.

The minister said the stakeholders at the Town Hall meeting in Kaduna came up with some recommendations to further secure and unite the country toward progress.

According to him, the stakeholders recommended supremacy of the law, empowerment of the Police and other security agencies, as well as the need for political restructuring.

The stakeholders at the meeting, he added, were united against secession, opting for a restructured and stronger nation.

He added that the meeting also recommended decentralisation, restructuring and reorganisation of the judiciary as well as training and retraining of judges.

“We cannot do these without constitutional amendment,” he said.

Mohammed said the stakeholders also recommended that all Nigerian children of school age should be in schools, noting that most recruits into insurgency and banditry were out-of-school children.

According to him, if the children of the poor are hungry and not educated, the rich will not be able to sleep.

He added that the meeting also recommended the recruitment of more policemen with more training to all security personnel.

“The stakeholders also recommended that security operatives be equipped with modern equipment to boost efficiency necessary to win the trust and confidence of the people.”

The minister advised religious leaders and traditional leaders to encourage what the constitution says about inter-ethnic marriages to forestall secession.

“Those who support separation and secession will be the first to run away when any problem starts.

“We should not listen to them as many of them have about four passports of other countries,” Mohammed said.

He said the stakeholders recommended state police and the need for the National Assembly and state assemblies to support it “because all security is local”.

Mohammed said the meeting also recommended that traditional leaders should be encouraged to perform their assigned roles in line with the 1979 Constitution.

He said the group also recommended autonomy to local governments and to allow their statutory allocation to go directly to them for security, education and infrastructural development at the grassroots.

“The stakeholders also recommended the establishment of ranches and grazing reserves with necessary amenities such as water, education and healthcare facilities for humans and livestock,” Mohammed further said.