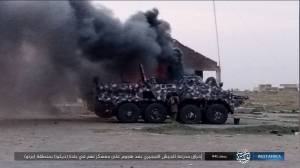 Members of the dreaded Boko Haram terrorists group has released photographs of the Nigerian Army’s gun trucks and a Borno State Police Command patrol vehicle captured and stolen after an attack on Dikwa.
The photographs obtained by SaharaReporters showed that the Nigerian Army, despite claiming it repelled the attacks, lost three BTR Armoured Personnel Carriers, Panhard AML-60 and another Melara Mod 56 Pack Howitzer to the terrorists.

The insurgents also displayed photographs of “Mortar Bombs and Type 86P hand grenades, PG-7V/PG-7VM, 37mm launchers, and 12.7mm ammo” it stole from the military in Dikwa.

Boko Haram also stole a police patrol van belonging to the Dikwa Police Division as it overran the town on Sunday.

The Nigerian Army had on Monday confirmed that the Boko Haram fighters attacked Dikwa town in the Dikwa Local Government Area of Borno State with no fewer than 12 gun trucks.

The terrorist group on Sunday night stormed Dikwa in Borno State to steal weapons at the military super camp.

It was gathered that this led to a clash between the invading terrorists loyal to Islamic State West Africa Province (ISWAP) and the Nigerian troops over the military formation.

One of the sources told DailyTrust that the Boko Haram/ISWAP terrorist stormed Dikwa from different fronts but were resisted by troops who were alerted of the impending attack.

“This is the third time the terrorists were attacking Dikwa in less than two months,” one security source said.

“The invaders are hungry for military hardware and therefore raiding military formations.

“They are not after territorial conquests but arms and ammunition. They also attack towns and villages for food; but as you can see, wherever they succeed they simply move on.

“They see Dikwa as strategic because of the Super Camp there. Remember they attacked the place two times few weeks ago after their encounter with our troops in Marte…I don’t know the situation now but the fight is ongoing,” the source said.