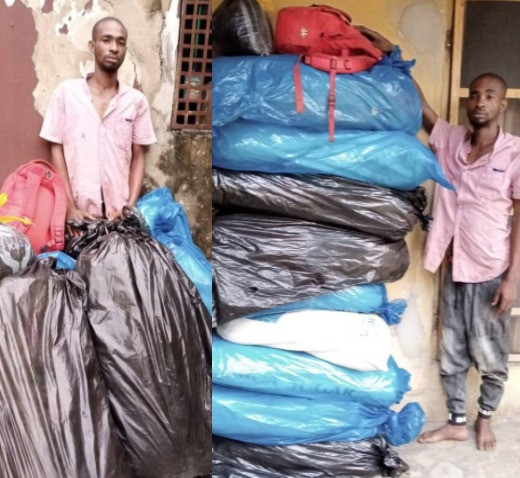 A major supplier of illicit drugs in Abia State identified as Chibuike Apolos, has been arrested by the National Drug Law Enforcement Agency, NDLEA.

Apolos was on Wednesday apprehended during an early morning raid of his hideout at Mbausi in Isialangwa North area of the state.

The spokesman of the command, Femi Babafemi, said Apolos has been on the wanted list of the Abia State Command of the NDLEA since February following the arrest of one Chima Ukeleonu, the suspect behind the video that went viral in January 2021, showing a young man hawking illicit drugs on the street.

He noted that development saw the 38-year-old Apolos was put on wanted list.

“Following his arrest in the early hours of Wednesday, the Abia State government has already marked his house that serves as his hideout for demolition,” Babafemi said.

He also quoted the Commander, Abia State Command of the NDLEA, Bamidele Akingbade, as saying that “The command has been on his trail since February this year. Fortunately we got a tip-off that he just received some quantities of cannabis from Edo State. Notwithstanding the tense security situation in the south east especially Abia State, the Command still embarked on the operations which culminated in the arrest of one Chibuike Apolos with 10 bags of cannabis weighing 100kg, 1.6 grammes of cocaine, one gramme of heroin and five grammes of methamphetamine

“The suspect is one of the major suppliers of illicit drugs in Abia State especially in the Isialangwa communities. The State governor has been notified and his building has been marked for demolition.”