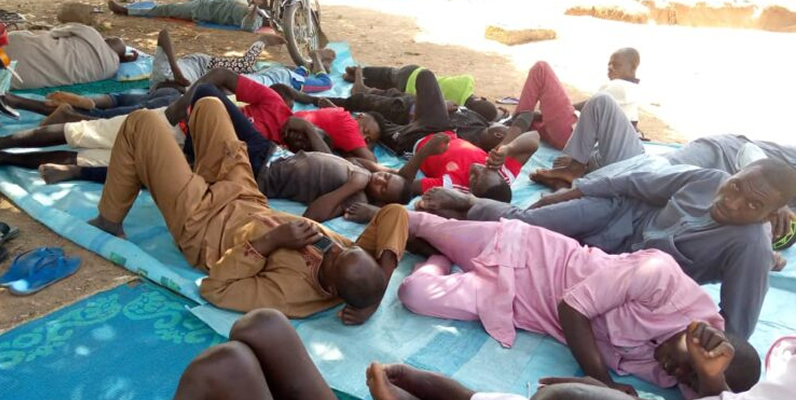 The Internally displaced persons (IDPs) in Niger state say they’ve being sleeping under trees weeks after bandits attacked their communities.

A former councillor of Allawa ward, Zakari Tambari said the IDPs have been suffering on the streets for weeks, and no government official has intervened in their situation since the attack, The Cable reports.

“We thought the government will come to our aid two days after the attack. We stopped expecting them after days turned weeks without support,” he said.

Zakari said “nobody” has come with relief materials, adding that the situation got worse when Ramadan started.

Recall that Allawa, Bassa, and other communities in the Lakpan axis of Shiroro LGA were attacked three weeks ago, leading residents to flee to the streets of Pandogari.

Sadi Mohammed, one of the displaced persons in Pandogari, explained that the IDPs have been sleeping “anywhere” including in schools and “under trees”.

“We have been given a place to stay in Pandogari, but the place is filled up. The district head of Pandogari allowed us to stay at Kangoma Academy after our request, but the Son Benedict (a private school) was given to us by the Christian association,” he said.

Haruna Umar, president of Shiroro youth development forum, said despite using social media platforms to relate the IDP’s situation to the government, no response has been received.

“These people are in a serious problem. You need to see them lying on the streets; you will weep for them,” he said.

It was gathered that despite being in session, displaced persons from Erena, Kaure, Galkogo are currently camping at a secondary school in Shiroro area, where they return to sleep at night.

However, Ibrahim Inga, director-general of the Niger state emergency management agency (NSEMA), said the government is aware of the situation of the displaced persons on the streets of Pandogari.

According to him, the government is trying to avoid unveiling its plans in public as the “informant elements” within the IDPs could instigate them to protest.

“The government is now looking at different dimensions of handling the security situation, which we don’t want to go public yet until we are fully in implementation stage,” Inga said.

“But for now, looking at the large number of IDPs we have across the affected LGA, the government is working assiduously and committing every resource to ensure safety and return to their normal lives.”

Inga said the government is trying to avoid conventional camping because of the new trend of the bandits.

“For now, we just have to hold certain information. We will not go to the press and we will not relate it to anyone, but those that are involved — that’s the security personnel,” Inga added.

The director assured residents that the current approach will bring banditry to an end.