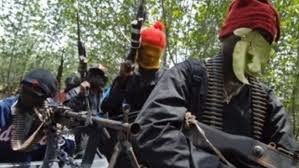 No fewer than 20 women have been kidnapped by armed bandits while attending a naming ceremony at Gidan Bido village of Dandume Local Government Area of Katsina State.

According to Katsina Post, the incident occurred on Friday, 23rd of April, 2021 around 1pm.

It was gathered that another group of bandits attacked and also kidnapped five men at Unguwar Bawa village of Dandume LGA in the state in the early morning hours of Saturday, 24th of April, 2021 around 2:00am.

The member representing Dandume LGA in the Katsina State House of Assembly is from Unguwar Bawa.

It was gathered that at least 40 women were also abducted by the armed bandits.

The gunmen abducted 30 women in Katsalle on Monday, March 8 while 10 others were abducted in Unguwar Tukur on Sunday, March 7.

READ  Young Boy Rescued After He Was Chained By His Stepmother And Father (Video)
Share this Post[?]