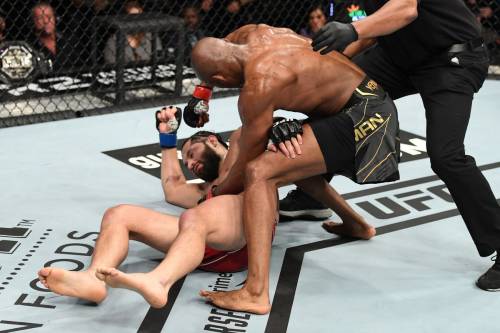 Usman landed a perfect right hand that took the lights off Masvidal with the Nigerian landing five hammer shots to close up the fight.

Kamaru Usman, the UFC welterweight champion has sensationally retained his title after knocking out his opponent Jorge Masvidal in the second round in the main event of UFC 261 in Jacksonville, Florida on Sunday.

A first-round that did not disappoint the fans had continued with more explosive action in the second.

Usman landed a perfect right hand that took the lights off Masvidal with the Nigerian landing five hammer shots to close up the fight.

The knockout came at one minute, two seconds.

The fight is the first UFC card in front of a 15,000 capacity crowd since the COVID-19 pandemic shut down spectator sports in March 2020.

The PUNCH reports that only Anderson Silva has more consecutive wins in UFC history (16).

But Masvidal came into that fight on just six days’ notice after Usman’s initially scheduled opponent, Gilbert Burns, tested positive for the coronavirus.

Masvidal is one of the biggest stars on the UFC roster. The Miami native was on a three-fight winning streak before falling to Usman last year and this year.

In 2019, Masvidal knocked out Darren Till, Ben Askren and Nate Diaz in a span of eight months to become one of the hottest MMA athletes in the world. The latter was for the mythical BMF title at Madison Square Garden.

Masvidal, 36, has been a pro fighter for almost 18 years but has just recently become one of the most popular MMA athletes in the world.