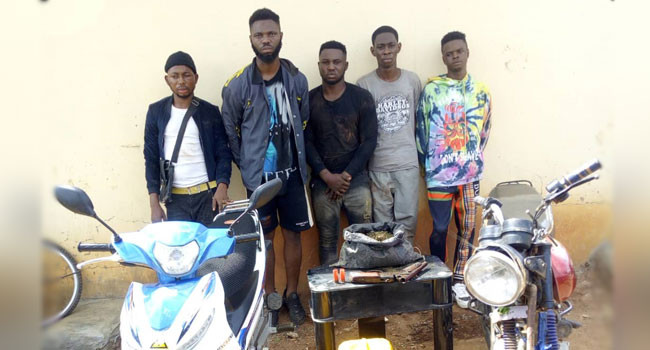 Five suspected cultists have been arrested by the police during an initiation ceremony held in a bush behind the Ekiti State University (EKSU) campus.

The suspected cultists who claimed to be EKSU students are identified as Adeyeye Adeyemi (29), Adeyemi Tobi (25), Moyosore Onajobi (22), Dickson Godwin (23), and Olowosaye Martins (21).

The Ekiti State Police Command spokesperson, Sunday Abutu said the Police Rapid Response Team acted on a tip-off and burst into the initiation venue to stall the exercise.

Abutu said that upon sighting the police team, the suspects shot sporadically but later bowed to the superior power of the security operatives, leading to the arrest of five of them while others took to their heels and escaped.

According to him, items recovered from the scene included a small-sized locally made pistol, two expended cartridges, a gallon containing liquid drug, weeds suspected to be Indian hemp, and two motorcycles.

“The information was received by the Police Rapid Response Squad (RRS), Ekiti State Command, that some members of the Black Axe (Aiye) secret confraternity were holding an initiation rite inside a bush behind the Ekiti State University (EKSU) Campus, Iworoko-Ekiti.

“Upon the receipt of the information, a team of the RRS Operatives, in synergy with the police personnel attached to Iworoko Divisional Police Headquarters swung into action and stormed the bush where the suspected cultists shot sporadically on sighting the police,” he said.