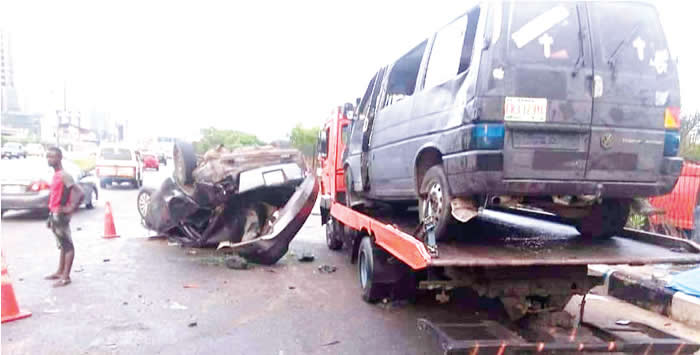 One person has been confirmed dead and three other injured after a commercial bus collided with two vehicles at the Admiralty Circle Toll Plaza area of Lekki in Lagos State on Monday.

It was gathered that the accident, which occurred around 8am, involved a black Volkswagen commercial bus with plate number FKJ123YC, a black Highlander SUV and one other vehicle.

The cause of the accident was attributed to top speed by one of the drivers, who lost control and hit the other vehicles.

One of the passengers in the commercial bus reportedly died on the spot, while three others occupants, who were injured, were rushed to hospital.

According to The PUNCH, an eyewitness, who spoke on condition of anonymity, said, “There was a fatal accident at Lekki tollgate involving a commercial bus and a car. Four casualties are on the ground while one of them is dead.

“The injured victims were taken to a nearby hospital for medical attention.”

It was learnt that emergency responders, who attended to the victims, included officials of the Lagos State Emergency Management Agency and the Lekki Concession Company.