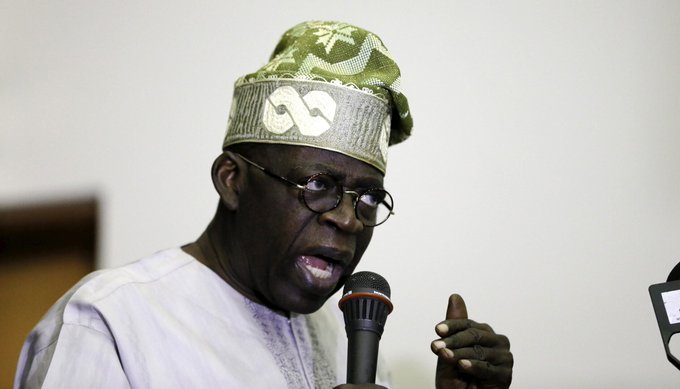 The National Leader of the All Progressives Congress (APC), Asiwaju Bola Tinubu, has appealed to those clamouring for secession to jettison such idea.

In a goodwill message at a Special Ramadan Prayer Tafsir lecture held at the Lagos House, Marina, on Sunday, Tinubu maintained that Nigeria is better together.

He said the drums of war being beaten by some people may result in crisis like Sudan and Iraq.

Nigeria, which according to him is yet to recover from the effect of the civil war, cannot afford to experience another war.

“For clamouring for war, God will not allow Nigeria to experience war. If we say Nigeria should separate, people should remember what war caused in Sudan and Iraq. Such war does not end on time and we are even yet to recover from the civil war.”

“We are better together than divided. I have nowhere I am going. Whoever has experienced war in the past will not pray for such. Nigeria will not separate; it is not acceptable to us. Our prayer is for prosperity and more wealth for the country and not separation or war,” he said.

Tinubu praised the governor of the state, Mr. Babajide Sanwo-Olu and his Deputy, Dr. Obafemi Kadiri Hamzat, for their achievements; saying the state has witnessed massive developments under the Sanwo-Olu administration.

Also, in his lecture at the event, the National Missioner of Ansaru-Deen Society of Nigeria, Sheikh Ahmad Abdul-Rahman, appealed to those clamouring for division in the country to have a rethink.

Though he admitted that insecurity is on the rise, he noted that with constant prayers, change of thoughts and character by Nigerians, the country would come out victorious.

The Governor of Lagos State, Governor Babajide Sanwo-Olu in his message promised to fulfill his campaign promises and deliver dividends of democracy to Lagosians.

He disclosed that the State government is in the process of installing 2,000 cameras across the state for security surveillance.

He also assured the Islamic clerics that the proposed LASTMA buses, which would be unveiled soon would eradicate the menace of Okada riders in the State.